Tomac on his Daytona win: Having that third win here is pretty special! 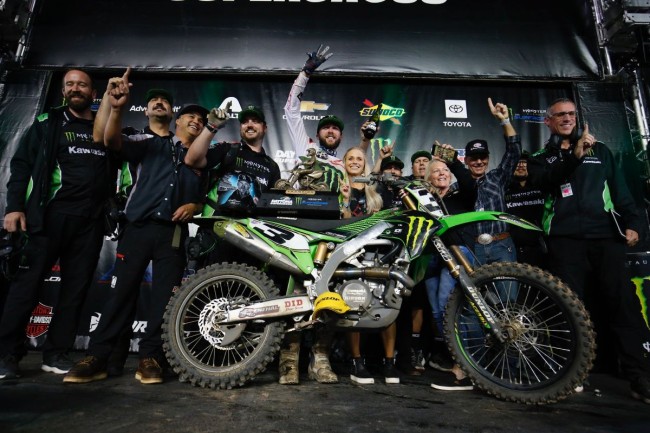 Eli Tomac admitted he was happy to turn to his day round in Daytona to take the third win of his career at the prestigious venue after being off the pace in daytime qualifying!

“Starting with the day, it was just tough. I was behind these guys, Marv put in a time that was 2 and a half seconds faster than me and I was sitting there questioning myself and we played catch-up and made some improvements in each practice,” revealed Tomac on his daytime struggles.

But he says by the main he found his flow: “Getting to the main event it took a little bit to get in the groove and got shuffled to third then finally found the lines and the flow, I was making good times in the whoops it just started coming to me. Having that third win here is pretty special.”

On trying to have a win streak, but having a bad race after each of his wins so far, Tomac said it’s all about his starts. “One thing is putting yourself in the right position right form the get-go, tonight Ijust got better starts straight from the heat and then I was right there, top three in the main. Last week I buried myself in the main and it wasn’t good enough, I wasn’t able to come through like the week before. The past couple of weeks it’s been a position thing.”

Despite his win, Tomac only made three points on series leader Webb and not sits 19 points behind the Red Bull KTM rider but he does move up in the championship, from fourth to second, tied with Marvin Musquin with Ken Roczen a further two points behind in fourth.

If ever there was a time to get on a win streak with only seven rounds left, it’s now!