Tomac on a disappointing Red Bud 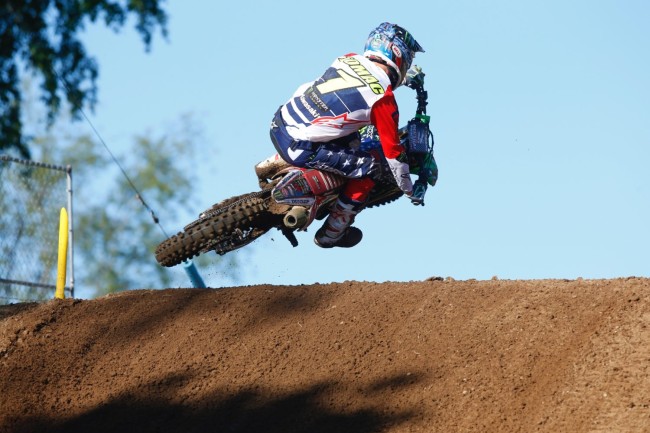 After qualifying with the second fastest lap time (2:02.4), Tomac lined up for Moto 1 in front of the patriotic Michigan fans ready for a thrilling day of racing. As the gate dropped, Tomac came off the line in third position. He wasted no time working his way out front into clean air and quickly racedhis KX into the lead. The race looked to be wrapped up with more than a 10 second lead with approximately two laps to go when Tomac was forced to pull off resulting in a DNF.

Moto 2 saw Tomac buried behind several riders in the first turn after an abysmal gate pick from the first moto DNF. Determined to fight his way to the front, the Kawasaki rider began passing his competition, working his way into the top 10. However, he made a minor error and was forced to make a stop in the mechanics area for a few adjustments, resulting in a loss of six additional positions. Upon returning to the track, Tomac continued to battle for position in order to capture as many series points as possible, ultimately finishing ninth for 15th overall on the day.

Obviously today didn’t go the way we hoped,” said Tomac. “It’s unfortunate because I felt really good on the bike in Moto 1 and to come away with no points was tough. Moto 2 was frustrating as well but I focused on salvaging any points I could. We’ll take advantage of the week off and come back strong and ready to get back to our winning ways.”

In Moto 1 of the 250MX class, all three Kawasaki riders charged out of the gate in the top 10 with Forkner in the best position. The no. 35 rider  quickly worked his way into second place and eventually took the lead, however, shortly after a competitor blocked his line causing him to go down and forcing Forkner to retire from the race. His teammates also suffered crashes of their own, with Savatgy having to pull into the mechanic’s area for a quick fix. He was able to rebound to finish 17th, while Marchbanks was able to recover quickly and race to an impressive sixth place finish.

The teammates lined up for Moto 2 looking for redemption as Forkner and Savatgy shot out of the gate in front of the pack once again. Savatgy held his second-place position for six laps before making a small mistake and forfeiting a few positions to finish fifth in the moto and 11th overall (17-5). Forkner continued to turn some fast laps, advancing forward for a strong second place finish and seventh overall (35-2). Fresh off of a two-week recovery from his crash at High Point, the young No. 182 suffered yet another crash in the opening lap and was unable to finish the race due to an injury that will be evaluated this week.

I’m pretty bummed about the first moto honestly,” said Forkner. “This is the second week in a row someone has collided with me and if we hadn’t come together like that in Moto 1, I feel like I would have been in contention for the overall today. I’m feeling great and my bike is the best it has ever been. We’ll get back at it in two weeks and I expect to be on the podium.”

“A couple of little mistakes really cost me today,” said Savatgy. “We had a fast bike and I felt good in qualifying but it didn’t show in either motos, unfortunately. I made a mistake in Moto 1 and went down pretty hard so I was happy to finish where I did. We’re going to work on a couple of things during the week off and look forward to Millville.”