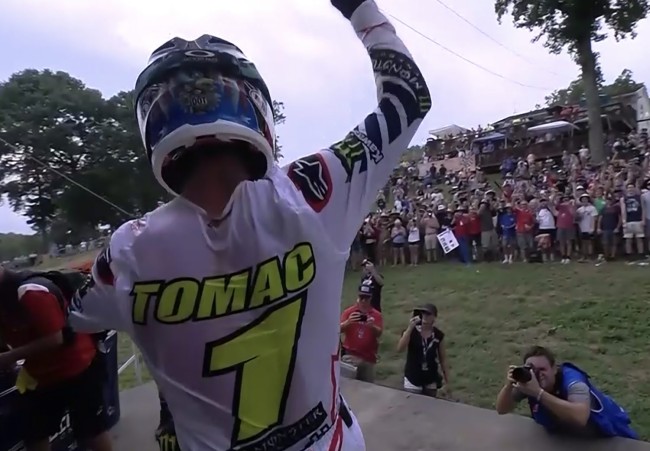 Eli Tomac clinched the 2019 AMA motocross championship by going 1-1 at Budds Creek to win his third 450 outdoor championship in a row- the first man to achieve such a feat since the legendary Ricky Carmichael.

It had initially looked like Tomac would need to wait until the final round next weekend but Ken Roczen, who had been running second, faded in the heat in the final few laps to give Tomac the title. Musquin, now second in the championship is 50 points back but, with more wins in the season, Tomac would still win the tie break if Marvin won both races next weekend and Tomac scored no points.

A stunned and happy Tomac said: “I didn’t know till the last lap, I thought I needed one more spot on everyone so I’m just in complete shock right now! We put last weekend in the past, gosh what a way to finish off, 1-1, that was so cool.”

In the 250 class Shane McElrath surprisingly dominated both motos as Dylan Ferrandis rued two bad starts that saw him miss the podium with a 4-4 despite a below par day for Adam Cianciarulo who went 2-5 but extended his lead in the championship by two points to 30 with one round reminding.