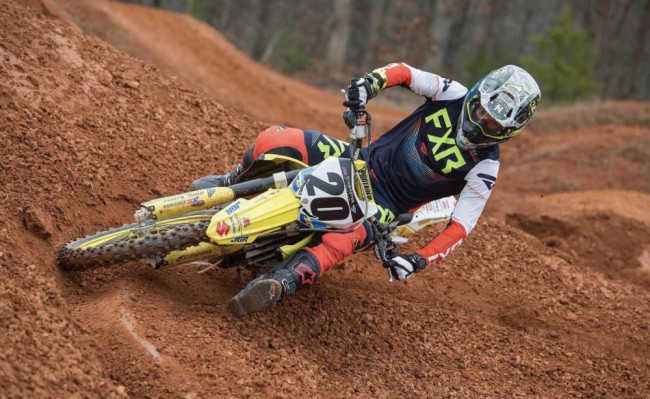 Brea, CA—As the two month COVID-19 induced hiatus from racing eases up, JGRMX/Yoshimura Suzuki is excited to get back to racing for the remaining seven rounds of the 2020 Monster Energy AMA Supercross Championship in Salt Lake City, Utah. After suffering injuries early on in the season, Suzuki RM-Z450 riders Broc Tickle and Freddie Noren are eager to return and prove they have what it takes to be a competitive threat in the premiere class. Alex Martin, who currently sits in a solid fifth place in overall points, will also return on his Suzuki RM-Z250 and continue the momentum he started in the 250 West Region.

Tickle, who has spent more than half his 450 career on Suzuki, made an impressive supercross debut with the JGR/Suzuki team during round seven in Tampa as a fill-in for injured Joey Savatgy. Unfortunately, an injured hand at the following round in Arlington put him on the sidelines for the next few rounds. Full-time 450 rider, Noren, also displayed a strong start to the season before suffering an ankle injury at round two in St. Louis. Although races were put on hold, it didn’t stop both Tickle and Noren from preparing for the series’ eventual return. Both 450 riders were able to focus on their health, and return back to the practice track to prepare them for a stronger and healthier restart to the season.

RM-Z250 rider Martin solidified his mark before the break, sitting in the top-five in the 250SX West overall points. “A-Mart” showed great strength the first half of the season with strong starts and top-five positions, and is looking to build off those results when he returns to Salt Lake. Martin was able to focus on speed and consistency during the unexpected series break, and is determined to make his way back up onto the podium.

Joey Savatgy and Jimmy Decotis will not return for the remainder of the Supercross series as they continue to focus on their recoveries.

The remaining seven rounds of the 2020 Monster Energy AMA Supercross Championship will take place at the Rice-Eccles Stadium in Salt Lake City, Utah, beginning May 31 through June 21, and will be broadcast live on NBC networks and the NBC Sports Gold app without fans in attendance.