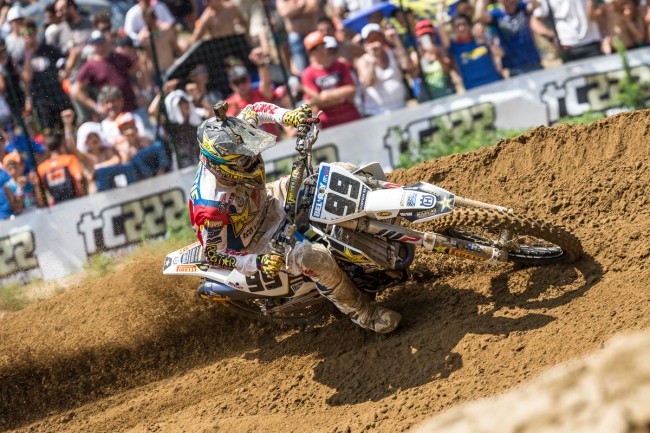 With just over six weeks until the Monster Energy Motocross of Nations heads to Matterley Basin on Saturday September 30th and Sunday October 1st. Team Manager Mark Chamberlain, in conjunction with the ACU Motocross Committee is pleased to announce that the three riders selected to represent Great Britain on home soil will be Max Anstie (MX1), Tommy Searle (MX2) and Dean Wilson (MX Open).

Max Anstie will be lining up in the MX1 class on his Rockstar Energy Husqvarna Factory Racing machine. After taking third overall at the Grand Prix of Lombardia in June and race podiums at both the Grand Prix of Lommel and Switzerland during his rookie season in the MXGP class, Max has proven his ability to be a front runner at the event.

In the MX2 class Tommy Searle will be dropping down to the 250f after recently returning to fitness and Grand Prix racing. Tommy has proven in recent years to be Team GB strongest rider at the event and took victory in the MX2 class at the MXON in Latvia when he last dropped to the MX2 machine for the event.

The third member of the team will be American based Dean Wilson on the Rockstar Energy Husqvarna in the MX Open class. Wilson currently sits fourth in the AMA 450 Motocross points standings with two rounds remaining. During the season Wilson has been in strong form consistently, taking overall podiums at both Southwick and Spring Creek.

With three strong and experienced riders, Team Manager Mark Chamberlain commented, “Dean is having a great season in the US and after meetings with Husqvarna Factory Racing on Sunday in Switzerland, they have agreed to supply Dean with bikes and assistance for the race which has made the decision straight forward. Max is having a great season and showed again in Switzerland that he is a potential class winner and he has expressed how much he is looking forward to and preparing for the race. For the MX2 class we have gone with Tommy as I feel that after 9 months off he still has a turn of speed, that on a 250f in six weeks’ time will be even greater again. His commitment to Team GB over the years and the belief I have is that he is still a World Class rider with a lot more to give.

Overall it’s a strong Team with experience that the fans can now really get behind leading up to and at the race. I’d like to thank all of the riders that have made themselves available for selection and shown how much riding for their country means to them now and in the future.”