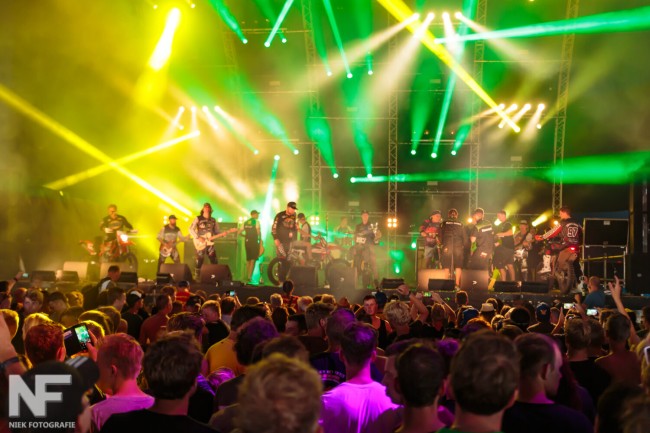 Motocross is such a great sport but here in the UK it struggles to get coverage from the mainstream media which would really help grow the sport.

The MX Nationals UK series have recently been getting their series coverage on the BBC which is positive. Adam Wheeler from On Track Off Road has also got coverage with a few articles in the Telegraph. However, other than that, it doesn’t get much coverage from the mainstream media. Road racing and short circuit racing seems to generate a lot more coverage even though Motocross is just as skillful – if not even more skillful.

Over in the Netherlands, the last Dutch Masters championship is ran with the Zwarte Cross festival. The event hasn’t always been as big as it is now but it’s continued to grow and now approximately 250,000 people attend the event. Not everyone there will watch the racing as some are simply there for the party but you’d be amazed at how many people do attend and watch the racing.

The crowd is like a Motocross Des Nations crowd – sure, they’re not all die hard fans but a lot of them might be watching Motocross for the first time. This is what can help the sport grow and get more fans into Motocross.

Festivals have been run with Motocross in the UK before but not anything massive. Surely it would be worth having a two day festival in the UK run with an International Motocross race.

Sign up some top DJ’s, for example, Scooter and Black Eyed Peas were the headline acts at the Zwarte Cross this year. People will pay to see those kind of names.  Along with the festival then some MXGP riders could be payed to contest the International race. People will pay for the festival so it should be possible to make the money back spent on the DJ’s and MXGP riders.

All of a sudden, you’ve got people who might not know much about Motocross but there’s an opportunity for them to experience it for the first time.

Obviously, a problem might be getting a track with the right surroundings for a festival. Though looking at Matterley Basin there’s plenty of room there for something really special.

With sports such as football, Formula One, golf and MotoGP they’re already huge but with Motocross – we need to bring it to the people. Running a festival with a Motocross race would also be a clever way of getting the mainstream media to give the sport more coverage as well.

At the Zwarte Cross festival which took place in July, we caught up with some riders in the paddock to get their thoughts on the event.

Joel Smets particularly is a big fan of the idea. “We have to keep on evaluating, how we can implement really world class racing with a festival. They both need to go hand in hand, it needs to be a win win situation and that’s not always easy. With such a big crowd and implementing the crazy cross and stuff like that isn’t easy but I’m a fan of it. I mean by combining it this way, we are bringing the sport to the people and that’s important I think. It’s not like cycling, tennis, soccer or formula 1 were the people will always come to the sport. With motocross sometimes we have to bring the sport to the public. You can see there’s a lot of people visiting the festival but once the races are on, it’s a massive crowd out there also watching the real racing. That means there is some interest but we need that interaction and I am a fan of it”.

Pauls Jonass was at the event for the first time and was a fan of the idea even though he wasn’t a massive fan of the track. “You know I think it’s pretty cool. There are many people who never come to a Motocross but then they come to a festival at the same time to watch the race. I think that’s good and maybe some new spectators will come to the races. I think it would be cool to have a better track and a more spectacular track for the spectators”.

Arminas Jasikonis and Henry Jacobi both shared the same opinion as Jonass.

“With the Zwartecross, it’s nice, it’s my first time here and I’m surprised with how big it is”, Jasikonis commented.

“The only thing is that the track is not really in shape with the big trucks and bikes going over it and everything. Overall it’s a great event for the sport. It’s good, people get to know motocross more because there’s like 200,000 people here and they can watch it if they want. Overall, I think it’s a good event,” stated Jacobi.