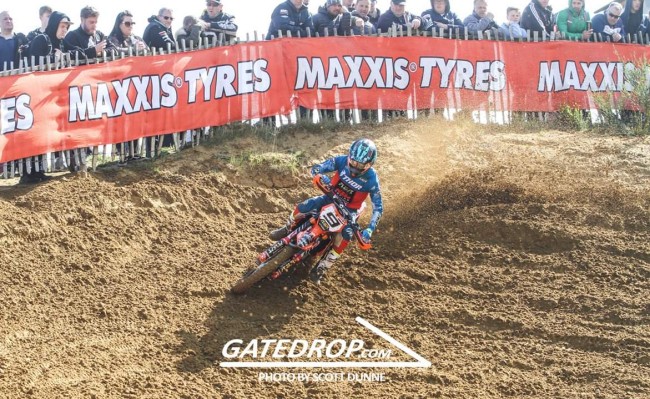 Jonathan McCready: It’s about time! I think this is a great and a much needed boost for many riders. After the U23 rule came into EMX250 as well as MX2 it has killed a lot of good rider’s careers who maybe aren’t quite of the MXGP level or at least not quite ready when they are kicked out of MX2.

There are a lot of great, quality riders who deserve to be racing on a big stage and I felt for a while an EMX450 style class could give them the opportunity to race on an international level for a good title with good profile. It gives them an opportunity show prospective MXGP teams what they can do and potentially put their name out as a fill-in rider or a full-time GP rider in the future.

Far too many good riders were getting lost and forced back to just racing national championships. Martin Barr and Mel Pocock are two high profile examples of riders who challenged for the EMX250 title last year but had nowhere to go in 2020.

Valentin Guillod admitted he almost quit the sport this year with no ride available and this is a guy who was winning MX2 Grand Prix not that long ago, then you have guys like Jens Getteman, Jeffrey De Wulf, Greg Aranda and Elliot Banks-Browne and many more who have serious talent but aren’t racing Grand Prix. For that level of rider this is a great opportunity if teams and bonus structures are in place, to put themselves back at the forefront of a big international series and back on Grand Prix circuits alongside their national series duties.

Out of sight and out of mind has been the case for far too many riders that are over 23 if they aren’t in the MXGP class and it is a waste of a quality generation of riders across Europe and beyond. This is a good way of starting to fix that, and hopefully the championship will gain momentum and be an important and prestigious championship for those who need more time to develop or didn’t quite make it to the premier MXGP class, but still want to chase a big international championship in front of MXGP teams and big crowds.

Andy McKinstry: At the end of last year Youthstream made a bit of a mess by announcing the EMX250 under 23 age rule so late – after a number of riders had contracts signed!

The age rule in the EMX250 class, means anyone over the age of 23 and not quite good enough for MXGP or can’t secure an MXGP ride basically had nowhere to ride except for maybe the EMX2T class. However, it can be hard for riders to contest if their team is a four stroke team.

It’s nice to see Youthstream have identified this as a problem and have now introduced the EMX Open class to run with the MXGP World Championship in 2020 by giving it six rounds. The EMX Open championship isn’t a new championship as it’s ran with the EMX85/EMX65 qualifying races for a number of years but it will get a lot more exposure now which will be good for the championship.

Also, five of the rounds are ran over five weeks. Budget wise that could be quite good for the riders as they can race National championships before and after the EMX Open series.

Hopefully the series is backed by a number of teams and we can see some good riders in the class. The series will be perfect for guys like Martin Barr, Mel Pocock, Simone Furlotti and Steven Clarke who got booted out of the EMX250 series last year.

The fact that the class is open is another positive too because if an MX2 rider wants to do the class they can race on their 250cc instead of needing a 450cc which would make it more difficult.

Hopefully the series gets some good support from teams and riders and be competitive racing at the front. It could become a class for the more experienced riders to impress and secure an MXGP ride.