Strijbos on his first GP for JWR Yamaha 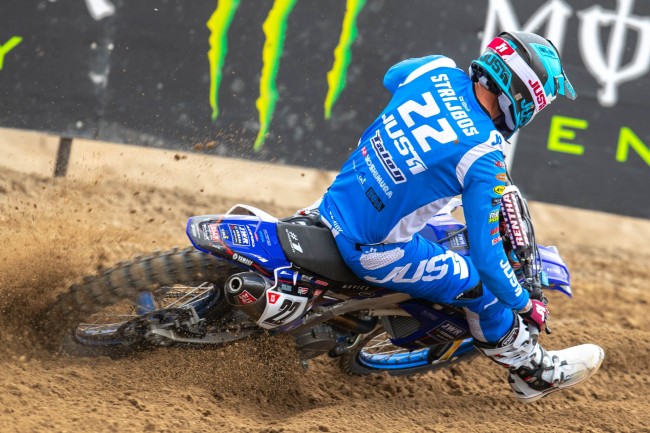 The JWR Yamaha Racing outfit were overjoyed to welcome Kevin Strijbos back to racing at the highest level over the weekend, as he competed in round five of the 2019 FIM Motocross World Championship alongside Vsevolod Brylyakov and Anton Gole. The Grand Prix of Lombardia, which was run at Mantova in Italy, acted as the location for the event.

Conditions on Sunday, which was when the points were distributed, were rather tricky, as heavy overnight rain transformed the circuit into a quagmire. It was sure to be an even bigger challenge for all involved, but one that the JWR Yamaha Racing team tackled head on. Vsevolod Brylyakov fared the best on race day, as he excelled in the technical conditions and pushed the established frontrunners for the first time this term.

Vsevolod Brylyakov charged from fourteenth to twelfth in the first moto, much to the delight of all involved, and then made similar progress as he moved from thirteenth to eleventh in heat two. The career-best race results in the premier class put him in eleventh overall at the Grand Prix of Lombardia, tied with the guy in tenth, and enabled him to jump up from twenty-sixth to twenty-first in the championship standings. A very productive day for the Russian!

Although Vsevolod Brylyakov was the best-placed JWR Yamaha Racing pilot, Kevin Strijbos was right on his rear wheel in both points-paying motos. Thirteenth was the position that he secured in moto one and then he pushed for a position inside of the top ten in the second moto, but he ultimately ended up in fourteenth and claimed thirteenth in the overall classification. Anton Gole, the final premier-class pilot on JWR Yamaha Racing, struggled in the treacherous conditions and only managed to add three points to his total.

The JWR Yamaha Racing squad will now immediately turn their attention to the Grand Prix of Portugal, run at Agueda, which will be held next weekend.

Vsevolod Brylyakov: “I played it smart in the motos and did not really rush or make the bike work too hard. A lot of guys did not finish, because of bike issues, so I knew that I had to play it smart with my lines and save the clutch. The speed was there. I managed to finish in eleventh overall, tied on points with tenth, so I was quite happy with the weekend. It was a good result. It was a good race for the whole team!”

Kevin Strijbos: “I was happy to be back racing, even if it was not on the ideal track with all of the mud. I just tried to keep it on two wheels and finish both motos. I have to be happy with 13-14 in the races, even if I was not riding great in these conditions. We know where we are at the moment and what we need to work on. It is not going to happen overnight, but we will get there.”

Anton Gole: “I struggled a lot with the track today [Sunday]. I had a start crash in the first moto and then two more crashes during the race… The second moto was better, but the riding was still really stiff. I did not get along well with the track on Sunday, but that is how it is sometimes. I am looking forward to Portugal next weekend.”