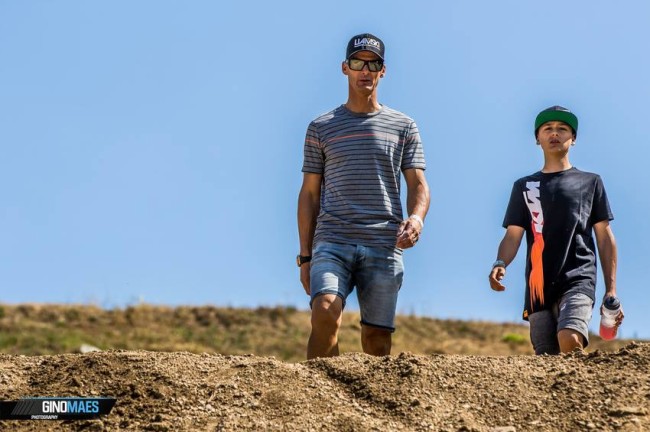 When asked if there’s a rider currently in the GP paddock that has a similar riding style to Stefan Everts, the Belgian sees Prado as the closest rider who rides like he did as he uses his feet in a similar way.

“I think Jorge Prado is a very technical rider. Also, you see how he’s working with his feet, were his foot positions are on the foot-pegs. They are quite similar to mine because I always used a lot the joins from my ankles to try and feel the bike with my legs and my ankles, how the bike was working and try to get it over the bumps. Not only to ride the bike with the upper body with your arms but also your lower body and the legs. I see this a lot with Jorge Prado, he’s very good with that and he rides with a high technical level. That’s also why it looks so easy with him when he’s riding”, Everts told MXTalkessel.

Everts says Herlings rides with a different style which requires a lot more effort but trains very hard – something he feels couldn’t have done when he was a rider.

“Sure (Herlings has a different style). He rides differently, he uses the power more and his body with more effort. I think it also takes Jeffrey a lot more effort physically to ride at that pace. He has a really strong body and can recover really fast, I’ve never seen anybody being that strong body wise. When he was 15 years old he was already like an adult of what he could do already. He trains so much – I could never have done that on that level the way he’s training. My body wouldn’t have been able to recover from that enough to go on for a whole season”, added Everts.

When it comes to breaking his ten times world championship record, Everts thought a few seasons ago that it could have happened but due to missing some titles because of injuries and with the likes of Prado and Gajser also hungry to win that it might be tough for him but that it is still possible.  “I think it could have been possible a few years ago (breaking his record) before he had the injuries he had. He missed a few championships which could have made it possible, right now, I don’t know”.

Everts was very impressed with the Tim Gajser he saw at Valkenswaard managing to beat Jeffrey Herlings in the first moto. A track that Herlings is very comfortable at – he’s won there nine times! The ten times world champion is looking forward to the hard pack tracks that Gajser excels at.

“I mean Jorge Prado is coming through the MXGP class and I think he’ll be a strong contender as well as Tim Gajser. I think after last year and from what I seen in Valkenswaard, to beat Herlings in that first moto – Herlings home track, to do that was pfft, impressive. It was a big statement from my point of view for the rest of the season because that was only on the sand track, at the hard pack tracks, Tim is even better”, Everts stated.

Whilst Everts acknowledges what Ken Roczen has done to come back from his big injures is impressive – he still hasn’t seen that extra magic he had on the bike before the injuries.

“Ken is very technical, especially as a young kid. He had that extra he could give on the bike. Lately with his big injuries, I haven’t seen that magic anymore that he had before. He went through very tough times coming back from these big injuries, it’s impressive. I can compare a little bit with my leg when I was out for a year, it’s also mentally very tough to regain the confidence in what you’re doing. You need confirmation of things and it hasn’t been there always. This year at the beginning he had some good races and a couple of wins, I think that was very important for him and the confidence to really 100% believe in himself again. I miss a little bit that magic that he had before the injuries – just that little extra he had on the bike. That I haven’t seen back yet”, Everts concluded.

You can watch the very interesting interview with Everts below – a lot of other topics are covered.