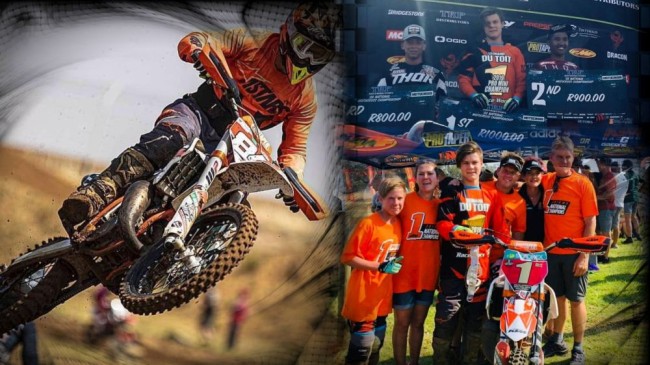 The first un-awkward introductions (South Africans are a cheery lot) having been made, we plop down for a hearty breakfast and an even more invigorating chat. From across the table, Leonard du Toit follows the proceedings with a gleamin’ in the eye from beneath a quiff that would not look out of place on a fashion shoot photograph. His excitement is palpable, riding high on a South African 85 cc motocross title just in the pocket, and with international racing adventures beckoning.

It’s been quite a route that brought him to this moment. The motocross microbe was inserted into Leonard’s bloodstream early. Both his dad Len and uncle Francois are keen riders and loved to compete. Leonard and his brother Barend therefore naturally had bikes shoved under their tiny derrières when they were only two bricks and a tickey high. At the ripe young age of seven, Leonard felt the lure of motocross racing, and off to the track they went. His start was not all that auspicious, and in early outings he was lapped up to three times. He smiles wryly when he recalls that his move up to the 65cc class marked a definite improvement, because then he got lapped only once.

Leonard moved up to the 85cc small wheel class, and results improved over time, with regional podiums beckoning. His first dalliance with major injury came when he was thirteen years old. A heavy landing, bizarrely without an actual crash, left him with two broken wrists. Undeterred, he moved on to the 85cc big wheel class. Still, fate had a few more black cards in store for him, and a badly-cased double jump left him dual pairs of broken tibias and fibias.

Now such such setbacks might cause many people to reconsider their hazardous pursuits, not to mention the fretting parents who have every inclination of not wishing to include regular trips to the hospital in their diary. Leonard was more determined than ever, though, and his face was set in square-jawed determination as he regrouped with some vigour. He sought out the counsel of pros, hired in a trainer, got the nutritional corner under control, and set off in pursuit of his goals.

Leonard is fortunate in having the backing of a very supportive family. Dad Len and Mom Daleen back the kids at the proverbial 110% level. Len was so enamored of the racing fixation that he established a KTM dealership called Raceworx. That takes us back a long, long way to a very memorable advertising slogan voiced by Victor Kiam, a wealthy businessman, whose wife bought him a Remington electric shaver. From thence originated one of the most memorable slogans of the late 70s “I liked it so much, I bought the company!” Oh, and we say “kids”in the plural – for indeed there is no respite for the parental wallets. Young brother Barend is also very handy on the bike, and hopes to emulate his older sibling in the 85cc Pro Minicross class in 2020.

The hard work and determination soon started yielding dividends. He charged hard from the beginning of the season, but the first podium eluded him for the first two rounds of the championship. Then, from round three onwards, he put his booted foot down with authority, and collected a series of wins, interspersed with a few second places. It was a dominant run, and enough to rake in the coveted title. The number 84 plate, culled from his hero you-know-who, had a red background for most of the season, and, most importantly, also when the final flag fell.

With that fine achievement in in pocket, a family council was called, as thoughts surfaced of casting the net wider. A goodly number of South Africans have gone on to ply their trade on foreign shores, and, indeed, in many instances with great measures of success. Greg Albertyn, Collin Dugmore, Grant Langston, Tyla Rattray, Gareth, Swanepoel, Shannon Terreblanche, Calvin Vlaanderen and Camden McLellan are amongst the riders who have raked in international honours for the Rainbow Nation. Leonard has his racing boots planted firmly in reality, and knows that a lot has to happen for him to even aspire to write his name amongst the illustrious countrymen that went before, but as the saying goes, you miss 100% of the shots you don’t take, so a start had to be made.

A flurry of correspondence followed, possibilities probed, facts checked. A fortuitous introduction by a mutual acquaintance brought the family in touch with the Dutch-based GPRMX team. As it so happened, team rider Rob van de Veerdonk was in South Africa at the time, nursing a just-bolted arm that had got an unintended kink as a result of a crash in a Namibian international event. Len and Leonard popped onto the short flight to Pietermaritzburg, and after the chins wagged for a while, the die was cast – Leonard would dip a toe into international waters for the 2020 season.

The plan it to participate in EMX125 -, Open Dutch Championship -, Dutch Masters of Motocross – and ADAC 125 Junior Cup events. It’s a punishing schedule, and Leonard is under no illusions as to the steepness of the mountain facing him. “We know that everything will be different – the tracks, the opposition, the level of racing. Our first objective is to get settled in the new surroundings and pick up experience. I know that even qualifying at this level is already a big challenge, so we’re approaching this with a solid dose of realism,” he says.

The GPRMX team will be Husqvarna mounted, and Leonard has already clocked endless laps on the 125 to get himself ready for that which is about to come. There’s been a flurry of activity, of course, with passports, visas, licenses, mom-hugs, entries, packing planning, air tickets, funding and a spattering of other matters having to be attended to in short order. It’s a strain, but the excitement of expectations makes it all worthwhile. It’s an exciting, largely unknown journey – one that’s been trod before by others, but one that is entirely new for Leonard and his family.

Leonard is extremely grateful for the assistance he’s received to get him to this point – his parents first and foremost, sponsors, family, supporters. He’s entirely humbled by the faith showed in him by the GPRMX team, and overawed by the encouragement from international federations, organizers, media, and even some of his soon-to-be opponents. “It’s all happening so fast, and I can’t be happier. I feel so fortunate, and will do everything in my power to justify everyone’s faith in me.”

As lofty achievement as it is, Leonard knows that his 85cc South African title is not the end yet. It is not even the beginning of the end. It is barely the end of the beginning, and there is a lot of story still to write. And write it he will.