Smets on Vialle and Herlings 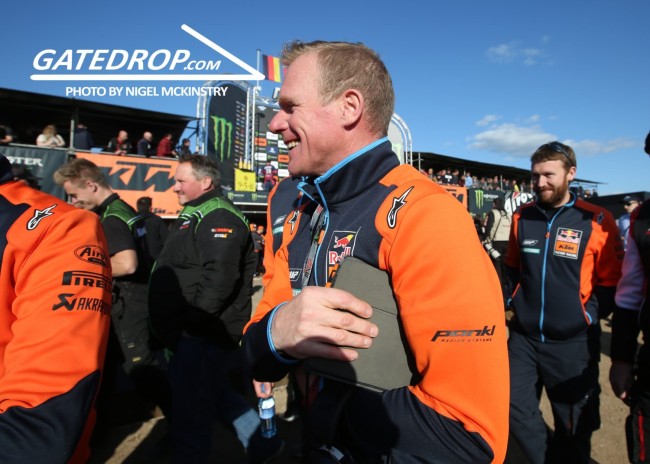 Joel Smets has been a big part of Tom Vialle’s successful transition to the MX2 world championship and so far all the hard work is paying off as Vialle took his first GP podium in only his second attempt!

We grabbed Joel for a quick chat to get his reaction to Vialle’s podium and his view on Jeffrey Herlings staying in MXGP when he returns from injury and not going to America.

It’s pretty impressive, it’s hard to believe. We did what we had to do in the winter but we didn’t know he could pull off this result already this early in the season. I kept in mind a podium was going to be possible, but for sure not in the first half of the season. Sometimes if you are working good, you get a little lucky like with Jorge not being here, otherwise we probably would have finished fourth. But when you work hard you get what you deserve, that’s how I feel about it.

He doesn’t seem intimidated by anybody, he’s getting to the front and fighting hard.

That’s his strongest point. Everybody says, which is true, he’s riding really smooth and stuff like that, he’s not taking any risks. He has a very smooth and technical style which of course we tried to work on during the winter, that’s the talent from himself but the biggest talent he has is his down to earth and realistic approach to everything and that keeps him really calm.

He knows he’s working hard, he knows where he wants to end up finally but he knows it’s a long road and the road to success is always under construction and that’s why he is not influenced by what is happening around him. He is doing his thing, he has a nice structure around him with his parents and the team and myself. He trusts in that and that makes him feel so relaxed, that’s why he stays so calm and handles the pressure so well. That impresses me more than the riding.

Jeffrey Herlings, it has been announced he is riding MXGP when he returns, no AMA Nationals, are you happy with that, is Jeffrey happy with that? Some of us wanted to see him in America, others didn’t, what was your view?

With my heart I would have loved to see him in the US and see that fight going on. But sometimes you need to take decisions and use common sense and use the head instead of the heart to make the final decision and that’s what we did.

And his foot, is everything coming along okay?