Searle on qualifying at RedBud 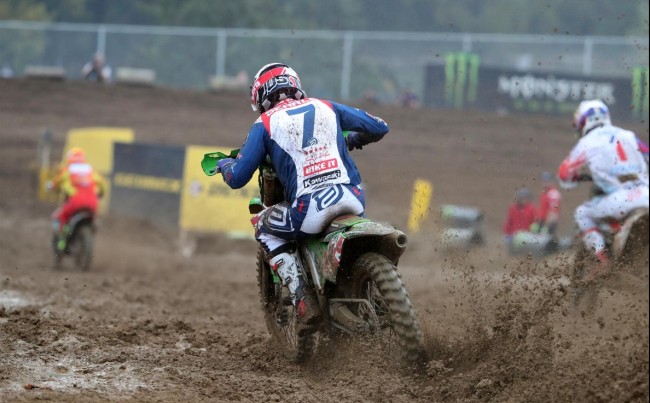 Bike It DRT Kawasaki’s Tommy Searle led Great Britain into the main programme for the FIM Motocross of Nations, the annual World Championship team contest, at Red Bud in the US state of Michigan.

Representing his country in the event for the tenth time, Searle was Britain’s anchor man in the MXGP class, giving his team a solid fifth place in the first of three qualifying races to ease the pressure on his younger teammates.

Tommy Searle: “It was a consistent day. I felt really comfortable on the track all day, everything went good and the atmosphere in Team Great Britain is very relax. It’s a very good track for me actually; in the race I just lost a bit of vision with steamed-up goggles but I think everyone had this problem and as the bike was getting hot in the mud I managed the bike during the last few laps. The track is great; hopefully we’ll have no rain tomorrow so we can have a good day’s racing. The start remains important and I’m really looking forward to tomorrow! It was great to see so many British fans around the track; I don’t know how many there are but it’s crazy!”

Five further Kawasaki riders have also advanced to the main programme, in which twenty national teams, each of three riders, contest three motos to decide the destiny of the world team championship title and the magnificent Peter Chamberlain Trophy. Alessandro Lupino of Gebben Van Venrooy Kawasaki helped Italy to second place in the team standings during qualification, and he and Searle will be joined at the gate by US champion Eli Tomac and Belgium’s world number three Clement Desalle of the Monster Energy Kawasaki Racing Team as well as Canada’s Tyler Medaglia and Brazil’s Gustavo De Souza.

Alessandro Lupino: “It was not really the day I was expecting. I rode a little stiff and got arm pumped during the race; that’s only the second time that has happened this season after Argentina. I didn’t take any risks as we had a good qualifying day with team Italy; we are among the top teams and everything is possible for tomorrow. I hope to improve my results tomorrow; I didn’t ride this week after my crash in Imola, and after the first practice session my neck was really painful. The Italian doctor helped me with massage and pain killers; it’s a shame as I’m not focused enough when my nerves feel the bumps.”