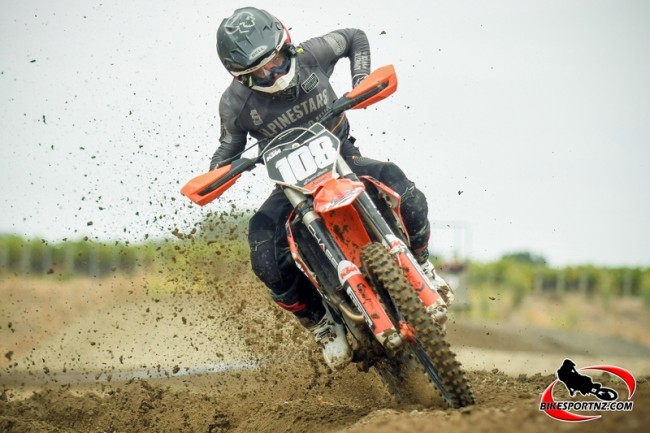 Oparau’s James Scott is ready for Europe, it’s just that Europe is not quite ready for him.

With a podium finish in one class and an outright win in another, this year’s New Zealand Motocross Championships were a great success for the 18-year-old Scott and he has naturally been brimming with confidence ahead of another motocross campaign in central Europe.

In addition to winding up third overall in the MX2 (250cc) class in the 2020 New ZealandMotocross Championships, the four-round series wrapping up at Taupo two weeks ago, Scott also won the battle-within-a-battle for Under-19 class honours.

However, with the recent Coronavirus COVID-19 pandemic causing worldwide chaos, many major sports events have had to be put on ice and Scott’s European 250cc Championship (EMX250) bid for 2020 has now been delayed a few months.

And that’s the best-case scenario, with a global lockdown on sports events likely to extend until Christmastime and beyond.

But Scott remains in a positive mood and keeping himself in shape as he awaits the all-clear signal to go.

“Racing has been postponed in Europe, so it’s just a matter of wait and see for me,” Scott said.

“The pace of the guys here in New Zealand this season has been really hot, so that’s been good preparation for me. I had been racing conservatively, to try to stay out of trouble and not injure myself ahead of my trip.

“Third overall in the MX2 class at the New Zealand nationals this year was not really the result I wanted, but I’ll take it and just glad I made it through the whole series without injury.

“I certainly had the pace to win.”

Scott has been lined up to race for the Raths Motorsports Team and, when he eventually heads away, he will be based in Germany, not far from the border with Belgium and the infamous sand track at Lommel. He intends to race both the German Motocross Championships and also selected European 250cc Motocross (EMX250) Championship events.

“I intend to race EMX250 championship races on a KTM 250SXF in The Netherlands, Italy, Germany and Belgium and I’m familiar already with two of those circuits.

“I know a lot of the riders I will be up against, having faced many of them before in the past, and I think a top-five result is possible for me.”