Sandner on his British Championship debut 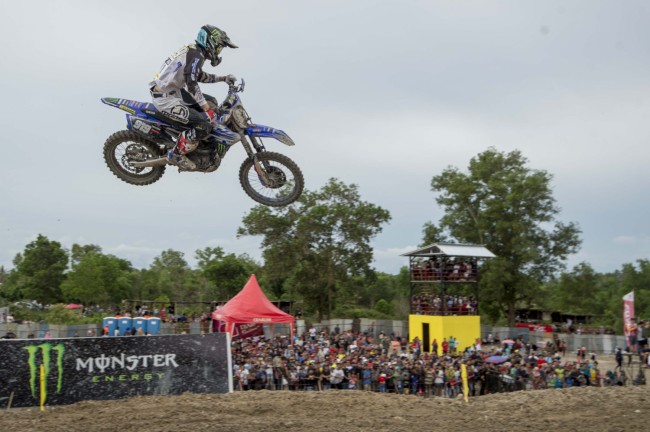 Rising Austrian star Michael Sandner made his Maxxis British Championship debut for the Hitachi KTM fuelled by Milwaukee team as the series visited the Foxhills track in Wiltshire for the penultimate round. Unfortunately, injuries meant that team riders Conrad Mewse, Bas Vaessen and Alexander Brown would not line up for the race.

Team Principle Roger Magee said “Michael had a good initial event at the MXGP of Belgium in Lommel last week where he surprised us with two good results, finishing fifteenth and sixteenth and showed he’s a real fighter. We know that Foxhills will suit him well being similar to tracks in Austria.”

Michael had a strong qualifying session, narrowly missing pole position by quarter of a second. In Race 1 he used his GP experience as the pack shuffled in the first few corners, ending the lap in fifth. Despite tipping over mid race and losing some ground Michael was able to regroup and take a comfortable fifth place finish.

A good start in Race 2 placed Michael in sixth position but a racing incident on lap 2 caused him to drop back to sixteenth before battling back up the field to cross the line in sixth place.

Summing up the day Michael Sandner commented, “In Qualifying I felt good and went second fastest. I didn’t make a good start in the first moto but got to the front quickly until I made a mistake in the valley. It was tough to find a good rhythm again but finished in fifth place. In the second moto a rider went across my front wheel and I twisted my handlebars and I crashed again so I’m not happy with the result. However, I really enjoyed the track today and racing in my first British championship with the team.”

Roger Magee, “Michael showed his speed in qualifying by finishing second, just 0.25 seconds away from pole. His hole-shot device didn’t release as quickly as it should in Race 1 which gave him a few issues in the first corner then a small crash meant the front few got away. In Race 2 another small crash on the first lap was costly but he battled all the way to the flag which is all you can ask. We’re looking forward to the next two Grand Prix which should suit Michael.”

Hitachi KTM fuelled by Milwaukee team now head to Grand Prix duties before returning for the final round of the Maxxis ACU British Championship at Landrake on the 22nd September.