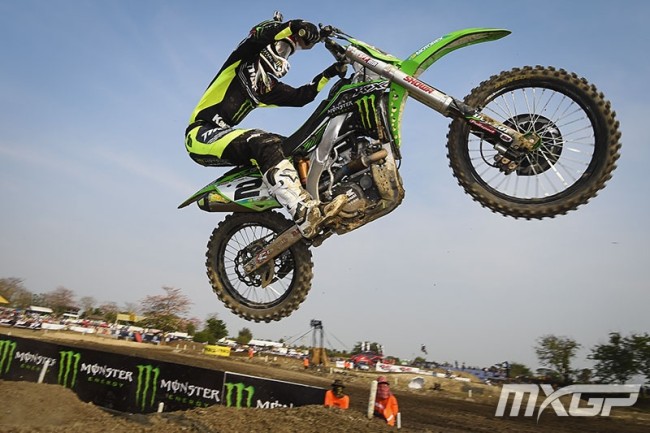 Jonathan McCready: It’s a shame that Ryan has went out this way. I think a lot of people hoped he would be back for the last few MXGP rounds in preparation for another go in 2016 now that he knows the format and difficulty of world championship racing.

I think RV underestimated the versatility required to race the World Championship, he was more concerned with ice cubes than the tracks in pre-season and that was a mistake. He was learning quickly but the depth of competition caught him off guard too. He expected to be the man or at least just have Cairoli as constant competition but his frustration at just being one of the boys is what finally caught up with him at Arco when Desalle forced it down the inside. That frustration is what ultimately lead to his loop-out and ended his career.

But in the comfort of his own country Villopoto will go down as maybe the second best American rider in history behind Ricky Carmichael. He was that good in the USA! In fact, had he managed to win a world title I would have put him alongside RC as the greatest ever US rider.

Villopoto will be remembered for his speed, aggression, his brilliance under extreme pressure and his business like mentality to racing. The Washington native never seemed to love the sport like we do as fans, but he put everything he had into it and recovered from some big injuries to win again in America.

It was a job for RV but a job he executed brilliantly. Unfortunately for Villopoto the way he went out will also be a memorable moment, but you have to respect him from leaving the US bubble and trying to win a world title, even if it didn’t go well.

But that was RV, he was cut from a different cloth. He tried the world championship when no other top US rider had the nerve to do it and he has never really cared about records or what people think.

Unfortunately for the USA he was their best chance at finally winning their first world title since 1994 and now the wait goes on.  But if RV has inspired another US rider to take on the World Championship challenge, and open their mind to racing outside of the USA , then he leaves a further legacy in addition to his American domination during his fantastic career.

He wasn’t always loved by everyone even in America, but Ryan didn’t want to be famous and play the fame game, he just wanted to win races and titles. He did exactly what he set out to do in the States and stayed the same guy throughout his success.

And for that and even daring to try to win the World Championship, everyone has to respect one of the best American riders to ever throw a leg over a dirt bike. Yes, we the fans will miss him on the track but now it’s time for Ryan to enjoy his life and his earnings without the pressure to race and win.

Andy McKinstry: The news we were all expecting was made official this week as RV has now retired as a professional rider. Let’s face it, it’s hardly surprising considering he almost quit before making the decision to come and ride the MXGP championship in 2015.

Before this season all the hype was on RV V Cairoli but RV wasn’t the only one to get a massive shock! I genuinely thought that RV would have no problem adapting to the fly away GP’s as the tracks are more similar to the US than the European GP tracks – they are totally different. Max Nagl and Clement Desalle had other ideas though as they started the season really well and quite frankly were faster than RV. Even Desalle beat RV in the second moto at Thailand, that track certainly didn’t suit the Belgian.

I don’t think RV would have been too surprised at the speed of Cairoli but it’s the depth of the class that would have surprised him the most. In MXGP there are around seven guys that can win, its stacked! I have seen a lot of people say that we never seen the ‘real’ RV in MXGP. Do people really think that RV was going to be able to come to MXGP and ride balls out every lap like he did in USA? RV had to adapt and he realised that after Qatar.

Saying that we never seen the ‘real’ RV is not giving credit to the GP riders – credit that they deserve. Also, Gautier Paulin and Jeremy Van Horebeek aren’t riding like they can, haven’t seen to many people saying we haven’t seen the ‘real’ them this season. At the start of the season Strijbos couldn’t ride to his full potential, another rider that could have been right at the front of the pack from round one if he was fit.

Why has RV quit? Honestly, I believe he knows that he would have to work his ass off and the fact that you have to be so versatile to be world champion, he probably doesn’t feel like he wants to put the work in.  For the fans its quite upsetting, it’s a shame this didn’t motivate him to want to stay for another year!

There is one thing for sure though, it was good to see the best American come and ride MXGP, respect to him for that. Let’s hope Eli Tomac, Ryan Dungey or another top American will follow him to the MXGP series soon!