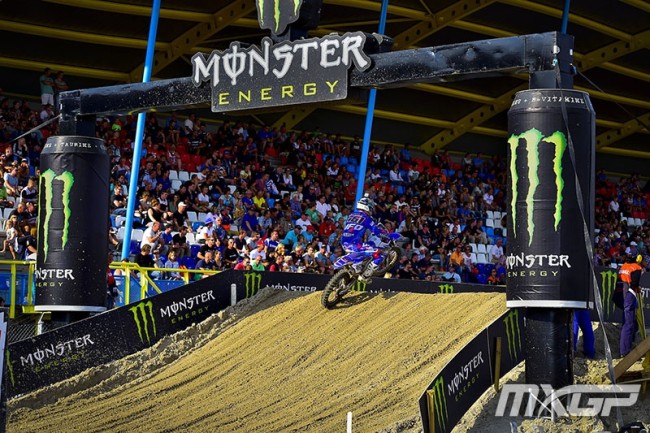 Romain Febvre has won the 2015 MXGP world title at Assen in his rookie season. with two rounds to spare!

The Frenchman took fifth in race one but rebounded with a brilliant win in race two to take the championship. Febvre then issued a warning to the rest of the field by saying he will be in even better next season.

It was another brilliant day too for Shaun Simpson who took the overall win at with 1-3 score in the Dutch sand.

Tim Gajser took a big step towards the MX2 world title by winning the MX2 class and taking a 13 point lead into the final two rounds of the year in North America over Pauls Jonass.

Jonass went down in turn one in race two and had to go into the pits to get his front brake taken off. He charged hard back to 13th point is now the hunter in the championship.

Max Anstie is now 44 points behind Gajser despite winning race two  after crashing his way to ninth place in race one and dealing with the bike cutting out when off the throttle.

To some people’s disappointment, the event at Assen was complete success. The circuit turned into a classic rough Dutch sand track at an iconic location. The grandstands were full, the atmosphere was electric and the crowd even saw a Dutchman on the podium, with a brilliant performance from Glen Coldenhoff!

All eyes will now be on the MX2 class as Gajser and Jonass fight it out for their first world title in Mexico and USA.