Roczen on his Red Bud moto win – I kind of got lucky! 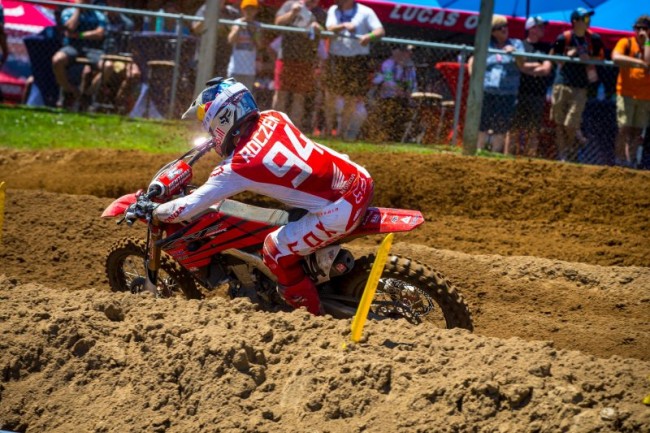 PR- In front of a massive Independence Day Weekend crowd at the iconic RedBud National in Buchanan, Michigan, Team Honda HRC’s Ken Roczen had a monumental day for round seven of AMA Pro Motocross, earning his first moto victory since 2016 before securing second place overall.

In moto one, Roczen got a solid jump out of the gate and was near the front of the pack when a rider went down ahead of him in turn two, briefly holding him up and leaving him outside the top 10. After the completion of the opening lap, Roczen had worked his way up to fifth. He continued his charge forward, moving to second on lap four. It looked as though Roczen would ride to a solid runner-up finish, but with three laps remaining, a mechanical issue for the leader allowed the German to move into the front spot, taking his first victory since suffering two serious injuries over the past couple of seasons. When the gate dropped on the day’s second race, Roczen was once again toward the front, even leading at times on the first lap. He settled into second, playing cat-and-mouse with the riders leading and trailing him for much of the 30-minute-plus-two-lap race. He fought hard to maintain his pace but ultimately slipped to third by the checkered flag.

During the day’s timed qualifying practice sessions, Ken Roczen struggled to find his groove on the deep RedBud track, logging a 2’06.064” lap for eighth overall.

Team Honda HRC’s factory CRF450R race machines donned retro 1998 Ezra Lusk-inspired graphics to celebrate the 20-year partnership between Throttle Jockey and Factory Honda. “This bike design is by far my favorite and looks so awesome,” Roczen said. “I can’t remember ever actually seeing the original 1998 graphics before, but it was pretty cool when the guys from Throttle Jockey brought over Ezra’s bike and I got to see them lined up together. It would be so cool to do more one-off stuff like this in the future.” Replica graphic kits will be available through Throttle Jockey’s website in the coming weeks.

The Honda CRF450R was the bike of choice in the 450 class, filling 14 of the 42 spots on the gate, the most of any manufacturer. The next Red Rider behind Roczen was privateer U.K. rider Jake Nicholls, who scored 10thoverall with 9-13 finishes, followed by Cody Cooper in 13thand Team Honda HRC’s Toshiki Tomita in 14th.

With the series now past its halfway point, Roczen sits fourth overall in the championship standings with 246 points, only 18 points away from third.

Next weekend, the series will take its second break of the summer before returning at Spring Creek Raceway in Millville, Minnesota, on July 21 for round 8 of AMA Pro Motocross “I’m excited for another off weekend, but it won’t all be relaxing,” Roczen said. “Some of the team is coming out to Florida to do some testing early in the week, but then we’ll probably spend a lot of time on the boat.”

Ken Roczen
“It was a great weekend overall and this is my second podium this season, so it feels good. I kind of got lucky grabbing that moto win because a few of the good guys were in the back and Eli [Tomac] had that issue. Still, I’ll take the win because that’s racing. Either way, it felt so great to cross the finish line for that first win since everything that has happened. We had a bit of a dip down in the results the last couple weeks, but to be back on the podium is awesome. I had a mellow week and feel like I just came back this weekend even hungrier and was riding a lot better. We’ve really just been figuring out the bike more. We made a pretty drastic change this week to see which way we should go with things, and it really helped me out a lot. I’m excited for the rest of the season and looking forward to getting back out there in Millville.”

Erik Kehoe
Team Manager
“Today was a huge accomplishment for Ken. This whole season has been about building and getting stronger each week, so for him to get his first moto win and be back on the podium with a second overall today is huge. He’s continuing to get good starts and is riding strong. We’re also making progress with the bike each week to get him more comfortable, so now it’s only a matter of time until he gets that overall win.”

Oscar Wirdeman
Mechanic (Ken Roczen)
“I think today was awesome. To see Ken get that first win after everything he’s been through was so cool. I know it’s not exactly how he would’ve wanted it, but a win is a win and we’ll take it. After a few tough weekends, I think this was a huge day for him to get back on the podium and head into the second half of the season reenergized. We