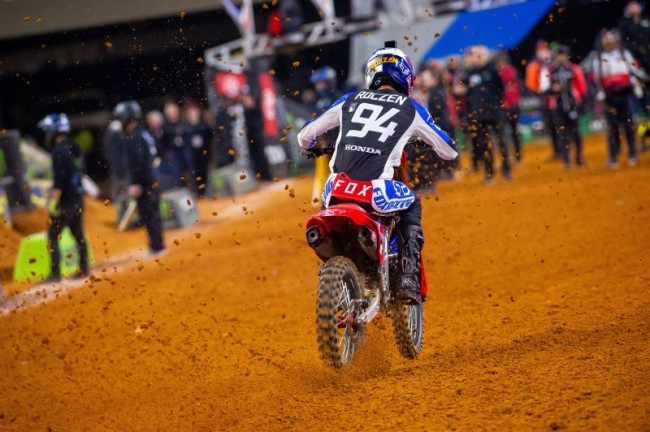 Round 8 of the 2020 AMA Supercross series in Arlington, Texas’s AT&T Stadium marked the second Triple Crown event of the season, and Team Honda’s Ken Roczen went into it with high hopes, having swept the previous event that was run under the three-race format, in Glendale, Arizona. Although the German didn’t ultimately capture another victory, he and his team were pleased to come away with an impressive second-place finish, via 1-7-2 results, leaving them in the championship hunt.

Roczen started the night on a strong note, launching out of the gate to a third-place race-one start and making some aggressive passes to take over the lead on the first lap. He continued to impress out front, riding flawlessly to take the win in the first race. He was unable to replicate his start in the second race, as he bobbled out of the gate and was shuffled to the middle of the pack, coming around in 10th. He struggled to make the necessary passes, battling hard but swapping back and forth before taking the checkered flag in seventh. In the final race, Roczen started in fourth and spent the subsequent 17 laps in a heated four-way battle, ultimately reaching the finish in second.

It was an all-around tough day for Roczen’s teammate Justin Brayton, as a number of crashes throughout the day and evening ultimately led to his early retirement from the second race, and his non-participation in the third.

Ken Roczen 94
“The first main was really good. I made some moves early and while I wouldn’t say I checked out, I rode up front the whole race. It was good to get that first win and start with a low number for the night’s overall points. I think the second race is the most important and we wanted to go out there and get a good finish, but it just wasn’t our race at all. I didn’t get the start I wanted and then couldn’t find the same momentum. I’m happy with how we executed the last race though. I battled hard and went back and forth with Eli [Tomac] a couple times and just rode much better in traffic, having people in front of me and making some passes. All in all, with how many crashes there were throughout the whole day and night, and how I struggled with the track overall, I’m really happy to come away healthy and with second overall.”

Justin Brayton 10
“Man, what a rough night. I had five crashes in one day—that’s more than I’ve had total in the past few years! I had three in practice, and the last one I thought was going to end my night. I caught my foot on the takeoff of the finish-line jump and it sent me down hard. I decided to suit up for the races after being checked out and cleared by the medical staff. In the first race, I got a good start, was running in fifth and feeling good. Unfortunately, with a few minutes to go, I crashed in the whoops. Then in the second ra, race, I crashed again, high-siding in a corner, and that one ended my night. I’m honestly sitting here in disbelief about how it all happened, but I’m also thankful nothing is seriously injured and I’ll be good for Atlanta.”

Erik Kehoe
Team Manager
“Today was a rollercoaster. It was good for Ken, but a bummer for Justin. Ken struggled a bit with the track early but seemed to find his groove later in the night. We didn’t have the consistency we ultimately needed for the win but he rode strong in the first and third race to still get second. For Justin, it was just an off day. He had multiple crashes throughout the day and it caused him to call it a night early. Luckily, he’s relatively okay and just sore, so he should be ready to go for Atlanta.”

Jordan Troxell
Mechanic (Ken Roczen)
“We’re happy to be leaving with another second tonight. These Triple Crown races are all about consistency, and unfortunately we were off in the second race, which made it tough to get the overall win. Second is still solid though, and we only lost a few points in the championship. We’re still right there and in a good position at this point in the season. Bike-wise, we didn’t make any big adjustments, just got it dialed for the track conditions. We’ve got a good base and Ken’s pretty happy, so we’re just working on small adjustments from here.”

Brent Duffe
Mechanic (Justin Brayton)
“There’s not much to say about today other than it was really tough for Justin. It was just one of those off days that continues to spiral from the first practice. I give him huge props though, he’s a tough guy. We were worried and didn’t know if he’d be walking away from his crash in the last qualifying practice, so for him to go out and race at all was impressive. We’re happy to put this one behind us and to know that he’s not seriously hurt. We’ll come back better in Atlanta.”