Roczen: I knew it was going to be a tough one 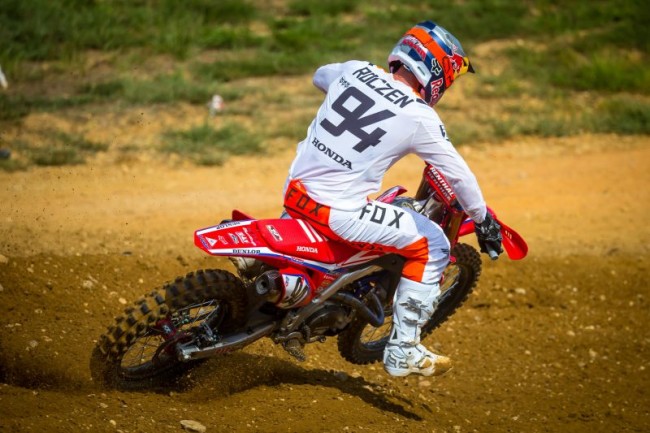 In moto one, Roczen rocketed off the line to a fifth-place start and quickly began working his way toward the front. By the green flag, the German had moved into second and set his sights on the leading Eli Tomac. Roczen tried to make an initial push but was never able to get close enough to mount an attack, so he settled into second, riding smart to the checkered flag. When the gate dropped on moto two, Roczen once again found himself toward the front of the field, moving into second on the opening lap. He maintained that position for the first half of the race before coming under fire by Jason Anderson. Roczen slipped to third on lap eight, and in the latter portion of the race, the heat and humidity began to take its toll on Roczen, who had difficulty defending his position. He ultimately relinquished four more spots, crossing the line in seventh

For the second consecutive week, Ken Roczen topped the board in qualifying, laying down an impressive 2’00.432” lap in the first session.
Roczen’s strategy during qualifying was simple: conserve energy and put himself in a good position. “The past couple of weekends, I’ve been doing something a little different in qualifying and it’s worked out pretty good,” he explained. “I spend the first lap picking a few sections to check out, then spend the second lap looking at the other parts of the track, then on my third lap I do a fast lap and piece it all together with my favorite lines. If the lap is good time-wise, I just leave it at that. It also helps me conserve some energy.”
On race day, Team Honda HRC and Roczen showed their support for Jonathan Mayzak and his family. Mayzak was a Pro Motocross racer who tragically lost his life from a tragic accident Friday that occurred the evening before last week’s Unadilla National. Roczen’s Budds Creek race-worn jersey, which wore a logo with Mayzack’s first pro number, 210, will be given to the Road 2 Recovery Foundation and auctioned off to support Jonathan’s memorial fund. The team also honored Mayzack on their factory CRF450R machines, running his last race number, 424, on their front fenders. Roczen’s fender and front number plate was given to the family at the end of the day.
The track conditions at Budds Creek were different than seen in previous years. “There was nothing to bank off of in the turns,” Roczen explained. “They didn’t rip it deep enough, so the whole track got super hard like concrete, and it was super dry and dusty.”
Team Honda HRC congratulates Eli Tomac and the Monster Energy Kawasaki Team for clinching their third AMA Pro Motocross Championship at Budds Creek.
Following his fourth-place finish, Roczen sits five points behind third in the championship chase with 421. Although the title is wrapped up, Roczen has his sights set on another goal. “It’s a bummer we weren’t able to battle for the championship, but we’re still within reach of second place,” he said. “That’s my goal for the end of the season.”
It was an up and down day for the GEICO Honda squad, as small mishaps in both motos hindered their riders from securing overall podium finishes. RJ Hampshire led the charge for the team, securing a solid third-place finish in moto one before a first-turn crash in the second race left him fighting for position. He worked his way from 21ston the first lap to eighth by the checkered flag, for fifth overall. Teammate Chase Sexton was seventh overall with 12-6 marks, while Hunter Lawrence finished 12thwith 10-13 scores. After a challenging professional debut at Unadilla, Jo Shimoda was the top rookie on the Amsoil Honda squad at Budds Creek, riding impressively aboard his CRF250R to finish 13thwith 13-12 finishes.
Next weekend, Team Honda HRC heads to the Ironman MX in Crawfordsville, Indiana, for the final round of the 2019 AMA Pro Motocross series. On Friday, Roczen will participate in press day, where he’ll hit the track for one 20-minute riding session. Later that evening, the HRC crew will also celebrate the season with a team barbecue at the track.

Ken Roczen 94
“I mean, today would’ve been a challenging day even at 100% fitness because it was so hot. We had a couple really good practices and then a good first moto. In that moto, I just tried not to go crazy, to conserve energy, because I knew it was going to be a tough one in the second moto. Second in that race was good, and I was also riding pretty well in the second moto, spending half the race in second. Unfortunately, my body just gave up in the second half and I could barely hang on. I lost a lot of positions, finishing seventh. It’s a bummer and definitely not what we wanted coming off of last weekend, but it’s a better finish than my previous races in the heat so we’re moving in the right direction. We’ve got one more race to make it happen.”

Erik Kehoe
Team Manager
“We had a very good first moto today. Kenny has been making some progress the past few weeks, and I think that showed in the first moto. Unfortunately, he just wasn’t able to maintain it for the whole second race. His start in the second moto was good and he rode strong, but the last 15 minutes he really struggled; the heat got to him and he was more in survival mode. Overall, I think Ken rode well. His starts were good and his speed is still there, so we’ll just give it one more shot in Indiana.”

Oscar Wirdeman
Mechanic (Ken Roczen)
“Today had its ups and downs. We were all hoping for another weekend like last, but unfortunately that wasn’t the case. Ken started the day great. He qualified fastest again with a good strategy to conserve energy—lay down a fast lap, then relax. He rode great in the first moto and in the beginning of the second moto but struggled toward the end. The heat just got to him and he wasn’t able to maintain his pace. We’ve been pretty much leaving the bike alone, just doing a few small clicker changes here and there to dial it in for each specific track. We’ve got one more opportunity to end the season on the podium.