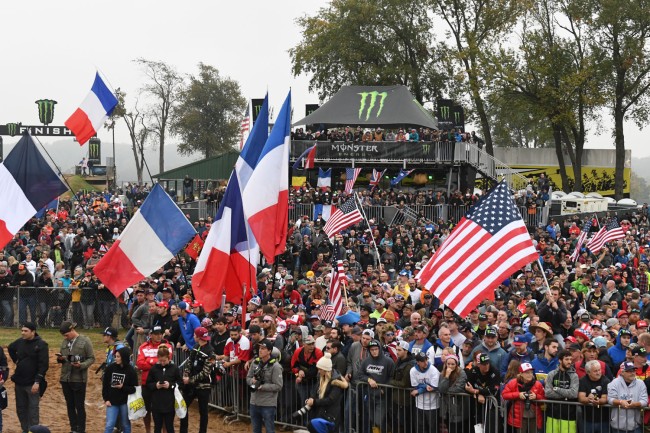 We’ve recently discussed the possibility of having a Ryder Cup style Motocross event which would see three teams – Europe V USA V Rest of World (slightly different to golfs version which is Europe V USA). A race like this would have a world class field of talent and would be really interesting.

We decided to ask around the paddock to get the thoughts of those in the know. Commercially the race could be huge but the main concern seems to be with the calendar. Unfortunately, running an event like this is pretty unlikely but for fun we thought it would be cool to see what people involved in the sport think of the idea.

Tim Mathys (Standing Construct GasGas): I support every competition where you can put the best athletes in the World against each other. For sure it would be great to have more than 3 USA and Australian guys behind the gate as in these countries there are a lot more fast riders. But I also think we have to watch out not to harm the International character the MXoN is having now. There are indeed some riders of some countries which are not of the level of most MXGP participating riders but the MXoN as we know it now gives these riders and countries the chance to show themselves to the World as well as giving a unique chance to their MX- enthusiasts to see their compatriot riders competing against the best in the World.

Livia Lancelot (114 Motorsports Honda): Races outside of the Championship are always hard to organise. As an MX Fan I would tell you a big yes – this is a great idea, as an Ex-Rider I would tell you when and how, because to be fair for each continent it is hard to find a date where the riders will be 100% to really show their best and as a Team Manager I would love to have my riders competing in such a big event, but the question will with which budget, we are already tight with 20 events , plus the MXoN. One more event is difficult to organise.

Roger Magee (Hitachi KTM fuelled by Milwaukee): I don’t think the Ryder Cup system would work as spectators really travel to the MXoN to support riders from their own Country. It would also stop non GP riders ever experiencing representing their Country/Europe as they wouldn’t even be considered.

Steve Dixon (DRT Kawasaki): We are trying to bring everyone together and finally we are seeing this happen, this just takes us back a few years, with current schedules the MXoN fits the bill of seeing the USA against the rest.

Neil Prince (RFX Husqvarna by PAR Homes): I don’t disagree with this idea. It would just depend on when the event would be, to me, it’s a little bit like the Motocross Des Nations. Maybe we could do something at the start of the year instead like we did back in the 90’s with the Starcross in Italy. Even if someone was to run that again so be it but again with the American’s with the way the season runs, it would make it very hard for them to fit into the schedule. For me, it would all depend on the calendar and when they can fit it in. It is a mega idea but, a few years ago Youthstream did the SMX Cup in Germany. It’s whether or not the market could take it – you’ve the World Championship, American series, it would be hard to get it at the right time to make everything work.

Daniel Zollinger (STC/IXS Yamaha Racing): Yes why not? I think you should always be open to new things. But it is also important that you put together a good concept for something like this and all sides are altogether –  the people who shape our sport.

Tony Alessi (Motoconcepts Honda): I think this is a good idea. Although it needs to be held in USA since the European riders are better at Motocross – it would help even things up. Also, America should get to choose which track to have the event on in USA.

Patrice Assendelft (Dutch MXoN team manager): You know, I like the idea but knowing the fact that there are so many races in the World Championship with twenty rounds, there’s hardly any room in the calendar for the riders to rest and relax away from small injuries and stuff. Adding even more races than what there is now, I think wouldn’t be very wise. Commercially, I think the thought is very interesting but I’d always prefer to have the Motocross Des Nations country by country. I think there should be more to interest American and Australian riders to participate in the world championship which would make it even more attractive than what it already is. Now the majority of riders are European participating in the World Championship, it would make it even more exciting if even more American and Australian riders came to race. Supercross is a totally different sport but the American outdoors, they’re not as strong as the World Championship. There’s a big big gap between the level there and the MXGP World Championship so if there could be more of an integration it might be more interesting for the American’s to race the World Championship and maybe for the Aussie’s as well. But, I don’t believe there’s any extra room in the calendar to add extra events so I wouldn’t be in favour of that.

Anton Gole (JWR Honda): This sounds like a fun thing to do but as packed as the schedules are especially in the USA I think it will be difficult to pull that true.

Petar Petrov (Team VRT KTM Nordpesca Holland): About the Ryder cup I think that would be good it can be fun and for sure very interesting for everyone but I really don’t think it will happen but anyway it can be cool.

Adam Sterry (JD Gunnex KTM): That would be fun but with the seasons being so busy already I can’t ever see that happening but it would be cool for sure.

Rene Hofer (Red Bull KTM): As a GP rider you have 20 GP‘s as well as the MXoN plus 2-3 pre-season races. So that‘s quite a lot. For the Europeans it would make sense to do it in pre-season, unfortunately that‘s also the Supercross season for the US guys.

Jed Beaton (Nestaan Factory Husqvarna): I think that would be cool but for sure it wouldn’t happen. We race enough all year long and same as the USA guys, it would be hard and complicated logistically to make an event like that happen!

Bas Vaessen (Hitachi KTM fuelled by Milwaukee): Sign me up for this kind of event (laughs). It won’t be realistic but it would be intriguing to see.