Rider quotes: Day One at Valkenswaard 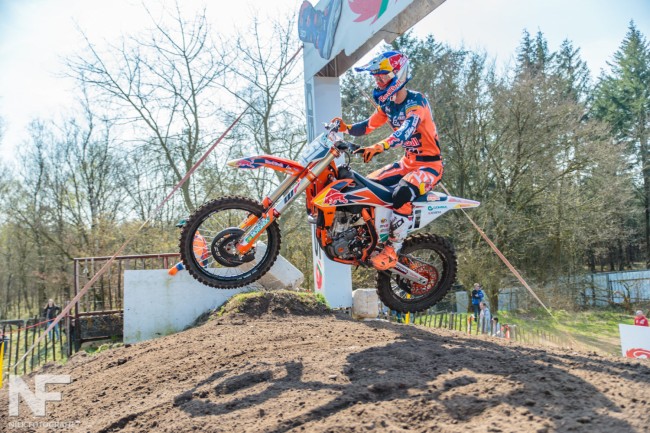 Antonio Cairoli: Actually, it’s (his shoulder) isn’t much better. I am still struggling a lot during the wee, I am not feeling 100%. Today in the race after 3 or 4 laps I started to feel my shoulder and I couldn’t ride like I wanted too and be aggressive. I slowed down a bit and tried to save some energy for tomorrow also because the track is very demanding I think. Theres a lot of jumps and higher than normal, you land on the flat in a lot of places. If you get a bad start here I think it will be okay to pass.

Last week you could relax in some places with the jumps or something but heres different. Tomorrow with the longer races I think after 15 or 20 minutes I will feel better and more free. I will try to go for the win.

The start isn’t really important at this track and I know that from coming here so many years. When you ride the sand you can have a not so good but if you’re good enough you can still always go for the win.

Jorge Prado: I missed not racing in England, I had the red plate but now I’m back with the black one. It was good to not go there and race because I couldn’t do any exercise for the last two and a half weeks. I just relaxed. Today, after two and a half weeks I felt good with the bike. Hopefully I feel the same tomorrow.

I expected the shoulder to be a little better, it’s still quite painful but if I’m going to go for the win I need to push.

Glenn Coldenhoff: I’m not so fit I have to say. You know before Argentina I only had 2 weeks on the bike and normally you have 2 months prep. It wasn’t great and Argentina was tough, Matterley was better. I was surprised by getting eighth overall because during the week I still felt really bad. To get eighth overall there was kind of like a podium feeling. That was great and I hope to continue with this progress over the week’s. I have pain still in my back, my ribs. Its looking like it won’t go away fast – its healing but very slowly. As the pain keeps following me it makes it even more tough.

It’s always nice to ride in Holland, I’m very proud Dutch so it’s good to race here. Its going to be a nice weekend of racing, that’s for sure.

Calvin Vlaanderen: I feel pretty good. I’ve had 2 fourth overalls but I want more and to be on the podium. I take what I can get. The first race at Matterley I put it down and got eighth then finished second which was pretty good for me. I’ve felt good this week coming into the GP, training went well and I had a good feeling in the track today. The qualifying race didn’t go as planned as I went down at the first and had to fight through the pack but I felt good on the bike which is positive for tomorrow.

Last year was my first year in the factory team and its completely different. I needed to learn a lot and this is the second year with them. Its more comfortable, they know what to say say to me and at the right time.