Report: Quadcross of Nations – Ireland on the podium 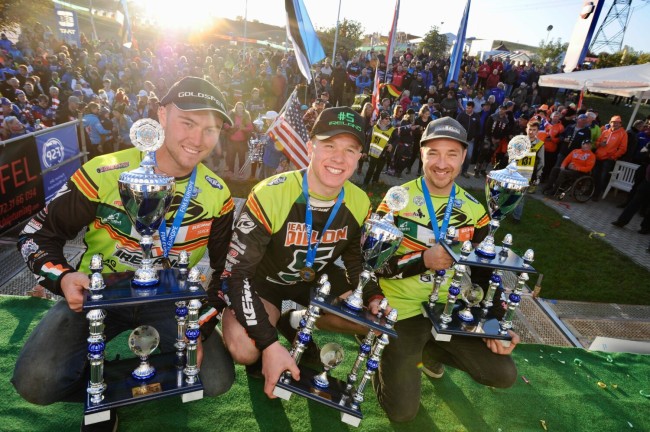 Team Ireland and Team GB battled with the cream of the USA and Europe over the weekend, overcoming adversity to both qualify through to the main event, and finish in the top ten overall.

Recently-crowned British QX Champ Mark McLernon, Justin Reid and Dean Dillon represented Team Ireland and celebrated with a third successive QXoN podium. Team GB, with the 2019 Under-21 British QX champ and QX championship runner-up Harry Walker, Oli Sansom and Murray Graham, overcame the difficulty of being a man down to finish in ninth.

A few incidents, coupled with a gnarly and boggy track claimed a number of victims in qualifying, amongst them McLernon, who suffered a machine failure in the opening qualifying set. In the second session, Team GB’s Graham crashed on lap four, when in fourth, and his machine landed on top of him. Fifteen teams qualified through to Sunday, and the Americans gave a masterclass in quad racing, setting out their stall early, with each of their three riders setting the fastest times in all three sessions. They were followed by the Netherlands and Poland with Ireland seventh and GB 12th.

A decent crowd lined the 1.750km track for the highly-anticipated ‘quad world cup’, with favourable weather set in for the day. Two riders per nation, from groups A, B and C, contested each of the three motos. The track though was deeply rutted and challenging, putting additional strain on all riders with, it would seem, the exception of the American riders – Joel Hetrick, Thomas Brown, Chad Weinen – who were super-smooth, quick and, it has to be said, in a different league to the European riders. They posted considerable winning margins over the rest of the field and would have finished one-two in each race if Weinen hadn’t blotted the team copybook by getting disqualified in the final leg due to course cutting.

McLernon, Dillon, Sansom and Graham were out for the home nations in the opening moto. Graham, battered and bruised from his qualifying accident, was determined to support his team. The young Scot battled valiantly until lap six, when lying in a credible 12th, his ruptured calf called a halt to his charge and he withdrew. Struggling with his set up, Sansom held ground and finished 19th. McLernon pulled through from eight on the first lap to finish a strong fourth, whilst 18-year-old Dillon in his debut QXoN, kept it all together to grab valuable team points in 11th.

With Graham sidelined, Walker was the sole Team GB runner in the second race. A good start saw him circling in fourth on lap one and then dicing with Dutch, Latvian and German riders to take sixth at the flag, ahead of a storming Dillon in eighth. Reid recovered from an early race incident, pulling through from 21st to 14th.

The final race of the day briefly saw a change out front with Dutchmen Joe Maessen and Van Grinsven leading the charge ahead of Jose Guerra (Argentina), Andrea Cesari (Italy), Antoine Cheurlin (France), Reid, McLernon and Walker. A poor start saw Sansom in 23rd. By the end of lap five, Hetrick was back out front, pulling away and putting a distance of 10-plus seconds over Grinsven within one lap. By half race distance, Hetrick was off and Weinen up to fourth with Walker all over him. McLernon was ninth, Reid 11th and Sansom 20th. Walker simply didn’t give up and, towards the closing stages of the race, closed down and passed Guerra to take fourth on track. He was later promoted to third due to Weinen’s disqualification. Guerra and Kevin Saar (Estonia) were also disqualified. McLernon and Reid both finished in the top ten, whilst Sansom secured much-needed Team GB points in 16th.

Walker’s efforts were enough to award him the best GB/Ireland individual ranking in fourth overall behind Hetrick, Brown and Van Grinsven. McLernon was sixth, Dillon an outstanding 11th, Reid 16th and Sansom 30th out of 54 of the world’s best quad racers.

Walker; “Challenging is the first word that comes to mind. It was very demanding and hard-going. It was a tough weekend for Team GB with Murray’s bad accident putting a downer on things really. Even though he tried his hardest to race, he just couldn’t. We have many positives to take away though. We bonded as a team, fought all the way an competed well. Thanks to everyone who got us out here.”

Sansom; “I was honoured to represent my country at the age of 32. I came here in the dark, thinking it was going to be part hard-pack and part sand, but track sort of polished out and then were was deep, horrible hard rough sand in most of the places where you could lose your quad, it was that deep. Then parts at the top were bone hard. Murray was unfortunate to get injured, which meant we struggled but fair play to him to even go out in the first race considering his injuries. My job was to bring points home and that’s what I did in qualifying and both races. I’m personally not happy with 19th and 16th and I probably could have pushed harder but I needed to finish, and that’s what I did.”

Graham; “I was riding really well in Saturday’s qualifying. I was in fourth pushing for third but four laps in and a crash put me out. I went to hospital and came out with a ruptured calf, sore shoulder and back. As it was a team event, I was determined to try and get back, rest and make sure I could ride on Sunday. I was in agony but, with a few painkillers, managed to get a good few laps in, and it up to 12th, but then the pain was too much. Glad to see the boys bring it home in ninth overall.”

McLernon; “Consistency put us on the podium again. They were hard races and the track was really rough, one of toughest ever ridden. I have to admit that there were times when I wasn’t overly hopeful, but we turned it round. Proud of the team.”

Reid; “Happy to be on podium again – kind of mixed results but Dean and Mark had fantastic races. Unfortunately, I came off in the second race when one of the French guys came across one of the jumps in front of me and basically sent me over the bars so my hips were a bit sore and I found it very hard to stand up in that last race. The main thing is that we got on the podium for the third time.”

Dillon; “I came here knowing I had a good team with Mark and Justin who have done it before. We knew we were there, or thereabouts. Everything seemed to fall into place. Our results were pretty good. I hung in there and felt I did myself proud and the other boys worked at it. Can’t believe we got third  – I never thought I’d have my own medal.