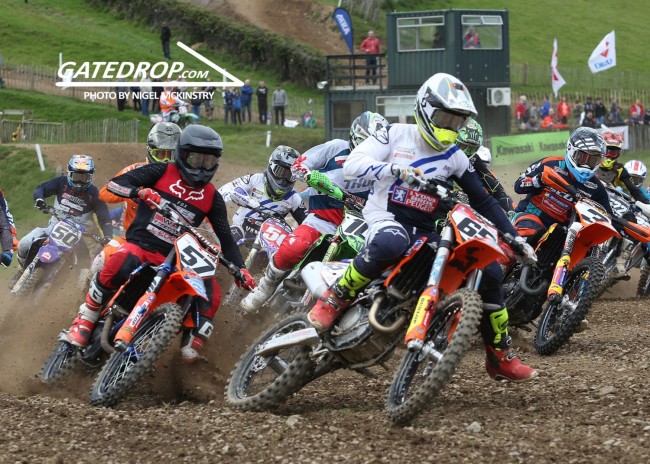 A slick surface provided tricky and challenging conditions as round three of the Ulster championship hit the hard pack for the first time in 2019 and threw up some different results in front a big crowd who enjoyed the racing on the hillside circuit at Seaforde.

Race one got off to an explosive start when Jason Meara went down in turn two and James Mackrel hit the deck just a couple of turns later, leaving the MX1 title chasing duo to fight it out with each other as they tore through the field!

Out front it was Robert Hamilton, Richard Bird, John Meara and Martin Barr but John then dropped it as the slick conditions caught the top riders out in the first moto. Meara however regrouped quickly and re-passed Barr before reeling in Hamilton and Bird. Barr tried to go with Meara and McCormick was hanging onto the back wheel of Barr when he spun out handing second in MX2 to Jake Sheridan.

Meara made the moves on Hamilton and Bird to take the lead and soon started pulling away leaving Barr to battle the 450 duo. Barr would eventually make his way into second with a couple of late race moves to win the MX2 class but he couldn’t catch a dominant Meara with defending champ Richard Bird a strong third.

Behind all that action Mackrel and Jason Meara were going at it! As well as passing the other riders coming through the pack, they were dicing with each other, swapping positions every couple of laps in some intense racing but with just a couple of laps to go Mackrel tipped over trying to force his way by Richard McKeown in bid to continue the battle with Meara who had just made the move a couple of turns previous! Meara would eventually get all the way up to fourth overall in the combined moto with Mackrel ninth.

Race two was the John Meara show! John took the lead and laid down some perfect, mistake-free laps in what was his best ride in a long time. Mackrel made his way into second but couldn’t close the gap as Meara sailed to the win with Jason Meara in third after a crash while catching Mackrel.

It was a tougher race for Martin Barr who dropped it while fifth and had a hard ride back through to third in MX2 and sixth overall leaving a very fast Glenn McCormick to take the win in MX2 and fourth overall.

Race three was another cracker. Heavy rain had turned an already slick track into an ice rink, and although the rain had subsided as the race got underway, the opening lap was all about staying on with nearly every rider having a sideways moment as they searched for traction and found none!

Amazingly it was Jake Sheridan on the 250 with the holeshot from James Mackrel as Jason Meara made his way passed Martin Barr for third.

Mackrel and then Meara would pass Sheridan with Mackrel edging away and making Meara work hard to close the gap.

Behind them the battle raged. John Meara worked his way into fourth ahead of Sheridan and Barr but the man to watch was Glenn McCormick who came from tenth and caught the battle between Barr and Sheridan!

It meant Barr, Sheridan and McCormick all had a shot at the overall and the three were nose-to-tail as the laps wound down. Sheridan kept his cool with Barr putting the pressure on and then Sheridan made a crucial pass on John Meara to put a 450 between himself and Barr as they approached the last lap flag.

On the last lap McCormick then managed to pass Barr and was pushing for Sheridan to get that overall. But he had to get John Meara first and when he pushed up the inside in a tight hairpin, John tipped over and McCormick got held up, allowing Barr back by and dropping Glenn back to third in MX2!

Up front Jason Meara made a late-race charge on James Mackrel but just ran out of time as Mackrel took the win with Sheridan crossing the line in third in a superb ride to take the MX2 moto win from Barr and McCormick but a 1-2-2 score was enough for Barr to win MX2 overall.

In Grade B Conor Mullan showed he can ride hard pack as well as the sand by winning the first two motos, a fall in race three meant he had to come from mid-pack but still pulled through to third overall and second in his class to take the overall win from Nathan Green who won the third moto on his home track. Ashley Allerton took the MX1 win.