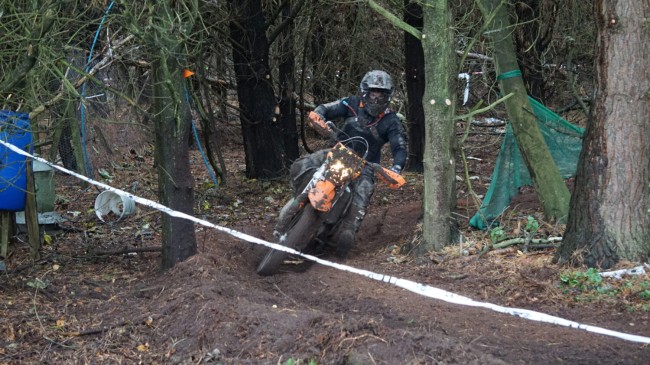 The event signalled the final round of the Adult SACU H&H, and penultimate round of the Northern Youth Enduro Championships. The conditions, after a full-on night of rain, were atrocious but that didn’t deter the healthy line up of riders ready and eager to both attack, and enjoy, a fast-paced and fun day of racing. A wet race awaited the competitors but, the deep sand venue situated right by the sea on the south east coast of Scotland, made for great racing throughout the ranks.

The adult three-hour adult event featured six classes catering for Expert, Clubman, Over 40, Clubman B, Over 50, and Sportsman. Whilst the youth sector ran 125s, BW85, SW85, 65cc Juniors, and Autos.

Andrew Bisset was on top form in the H&H Experts and, as the only rider to put in 13 hard-fought laps, was the class and overall winner, however, it was Sportsman Craig Fordyce who – clocked at 22.816 miles/hour – put in the fastest speed. Steven Craig, second overall, was comfortably out front in the Clubman class and, together with Kenny Thomson, banked 12 laps, whilst Gavin Johnstone, who had enjoyed a leg-draining tussle with Clubman Thomas Drysdale and took the winner’s spoils in the Over-40s Clubman B saw the top five evenly matched, with Kevin Watson, George McBeth, Tommy Drennan, Adam Russell and Matty Cameron, all with 11 laps under their racing belts. Rob Swinbank was in a class of his own in the Over 50s, taking the win with a healthy margin over Steven Hawes. In the 36-strong Sportsman category, the top nine were evenly matched, all posting 10 laps, with Matt Thornburn out front, followed by Archie Stewart.

The youth riders, particularly the autos, struggling with the heavy conditions. Brandan Burns was in a class of his own though in the 125s, putting in a creditable nine laps in the 1.5-hour chase. Billy Rippon and Alex Morris followed on eight laps apiece. The 85s all set off together in furious fashion with Cristina Palmer taking an early lead on her SW ahead of BW riders John Stanley and Sam Boyde. The hard-charging lass kept the boys at bay for as long as possible but, eventually, they passed and broke away. In the 65s, James Lindsey was pushed hard by Ruben Trew and the promoter’s ‘star-of-the-day’ was little Mya Beaumont who, in her first-ever race battled adversity and tears to complete not one, but two laps to get a finish, a huge round of applause and a big trophy.