Reed on ninth at Anaheim one: Interesting weekend! 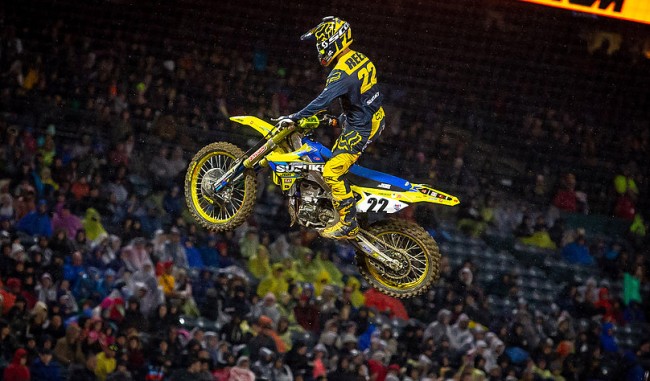 After racing the 250 East Supercross series in 2018, Jimmy Decotis was eager to contest the 250 Western Regional series. The Peabody, Massachusetts native instantly looked comfortable on the technical Anaheim Supercross track in qualifying third fastest. Decotis nearly holeshot his heat race, but went wide and tucked the front end. The 27-year-old used his veteran experience to meticulously work up to the front and transfer to the main event. After starting 10th, Decotis used his #64 RM-Z250 to move up to seventh by conclusion of the race.

Easily one of the most popular riders in the pits, two-time 450 Supercross Champion Chad Reed made the main event through the Last Chance Qualifier and put his name in the record books with his 18th consecutive Anaheim 1 Supercross race. As the heavens opened up, creating a muddy main event, “Reedy” embraced the challenging conditions in scoring ninth. It was his 205th top-ten finish in professional racing.

Anaheim 1 served as Justin Hill’s first time racing the opener in the 450 Class. The 23-year-old impressed in the daytime qualifying sessions, putting his Suzuki RM-Z450 on the top of the fast lap board. Slick conditions during the night program held Hill to 15th in the main event.

Brazilian Enzo Lopes was eager to race his first professional Supercross, and “The Kid” rose to the occasion. Lopes qualified 10th fastest in combined 250 sessions, and then logged one of the fastest laps in his heat race. Unfortunately, a first-turn pile-up in the 250 main event slowed his advance. Still, Lopes rode exceptionally well in his first-ever Supercross.

Jimmy Decotis [250 Class, 7th Place] – “The first round of the year with the JGRMX/Yoshimura/Suzuki Factory Racing crew was a blast. I was excited to debut the new Suzuki RM-Z250. I felt very comfortable all day. Unfortunately, I had a crash on the start of the heat race that put me in a tough spot for the main event. The conditions were tough due to the rain. Overall, I’ll take a seventh given the circumstances. We have lots of racing to come, and I’m excited to grab some more starts. I want to show the industry what the new RM-Z250 can do. Thanks to the whole team for supplying me with the best equipment. I’m looking forward to Glendale!”

Chad Reed [450 Class, 9th Place] – “With the weather, it was an interesting weekend. I had the feeling that no matter what I was going through, it was going to drastically change by the night program. I tried to get the most out of the daytime practices and qualifying to have good data for the next round in Glendale. Once the weather came I just dealt with it. I didn’t get the best of starts in my heat race. The conditions were tough and challenging, so I had to go to the LCQ. In some ways, it rained quite a lot in the LCQ, so I had a feel for what the track was going to be like in the main event. The downside was that I was on the far outside gate for the main. I was dead last on the start and came up to ninth, which is respectable. I feel like I have the pace. There are just a few things I need to work on to allow me to feel more comfortable when I’m out of my comfort zone. I have to adapt to the pace, but fortunately that’s one of my strengths. Sometimes that pace comes naturally, and other times it’s forced. I need to be more comfortable in that area. That’s something I will work on this week.”

Enzo Lopes [250 Class, 15th Place] – “Practice and the heat race was awesome. I don’t know what happened in the main event. I somehow stalled my bike, and then I crashed, so that made it worse. It was unreal to line up on the gate for my first Supercross race. I had that dream as a kid. I had a perspective of watching from the stands or from home. Placing third in the heat race was incredible. I had the speed, but the track was sloppy, so I couldn’t attack. The main event wasn’t what I wanted, but there’s another race. I learned a lot.”

Justin Hill [450 Class, 15th Place] – “For a moment in time, before I fell in the slop, that was the best I had ever felt in a mud race. I’m very bummed about the end result, but there are several good things that I learned from this weekend that I can apply to the next 16 rounds.”

Jeremy Albrecht [Team Manager] – “Jimmy Decotis rode great. He was the best one of our group. He didn’t get a great start in the main event, or things would have been different. Once Jimmy cleared traffic after the opening laps, he started putting together great times. Enzo Lopes rode awesome all day. He qualified well into the main event, but stalled the engine off the start. Enzo was charging through the pack, but was taken wide in a corner and fell. What’s interesting is that Weston Peick watched Enzo closely all day and was very impressed with him. That was cool to hear. Lopes did well for his first ever Supercross race.”

“In the 450 Class, Justin Hill had a tough day. He has been riding really well, but for some reason he struggled with the Anaheim track. Justin can ride better than his results show from Anaheim, and he will be looking to redeem himself this weekend. Chad Reed struggled all day, but a ninth place in the main was acceptable. He’s not happy with finishing ninth, so that’s good. Our team is healthy, the Suzuki motorcycles were great, and the riders aren’t happy with their results. That tells me there are better things to come.”