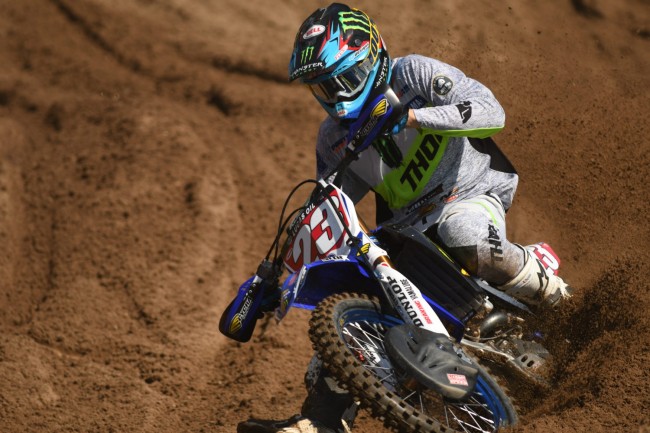 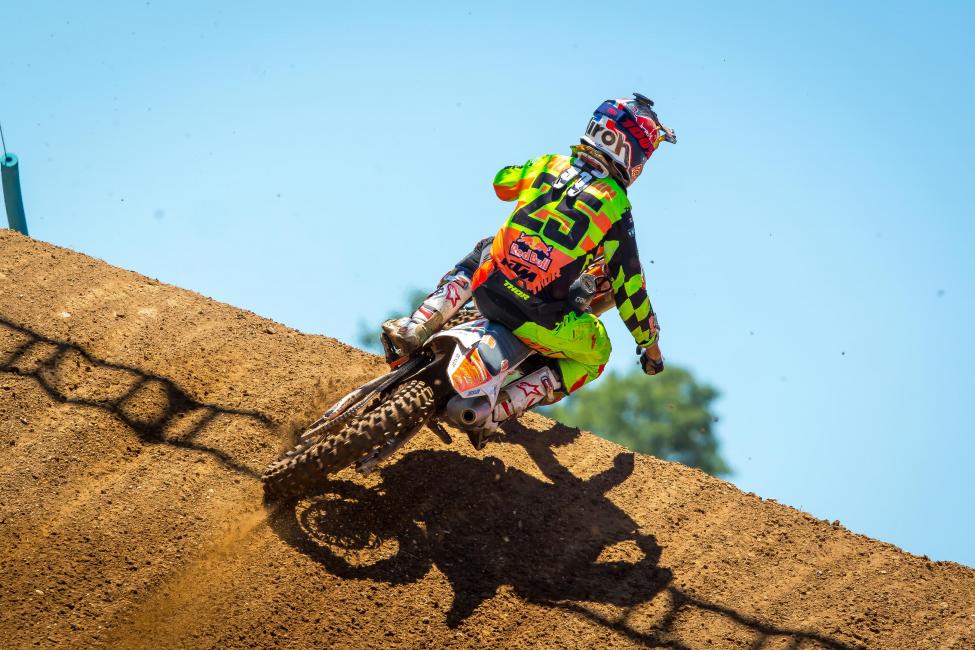 The first 450 Class moto of the day began with RMATV/MC-WPS-KTM’s Blake Baggett grabbing the Motosport.com Holeshot ahead of reigning champion and defending RedBud winner Tomac. While sprinting on the opening lap, Baggett crashed, which allowed Tomac to move into the number-one position with Rockstar Energy Husqvarna Factory Racing’s Phil Nicoletti and Phoenix Racing’s Heath Harrison in tow. Musquin and Monster Energy/Yamaha Factory Racing’s Justin Barcia circulated the opening lap near the tail end of the field after a crash took down both riders in the second turn.

With a clear track out front, Tomac attacked the rough and rutted conditions and quickly began to distance himself from Nicoletti, who continued to ride strong in second. On Lap 3, Team Honda HRC’s Ken Roczen made the move on both Harrison and Nicoletti to take control of second, shuffling Nicoletti back to third. RMATV/MC-WPS-KTM’s Benny Bloss clawed his way through the front-runners as well and made a successful pass on Nicoletti for third on Lap 5.

As Tomac cleared the halfway point of the moto, he held a commanding lead over Roczen, who maintained a solid pace to control second. Despite a crash on the opening lap that left him buried in the pack, Musquin put on an incredible charge and quickly closed in on Bloss for third. On Lap 14, Musquin kept rolling and overtook Bloss for third.

With just three laps remaining and a lead of nearly 15 seconds, misfortune struck Tomac as he was seen pushing his bike off the side of the track and out of the moto. Tomac’s trouble allowed Roczen to inherit the lead and take his first moto victory since 2016 by 10.9 seconds over Musquin. Third went to Bloss, who took the first moto podium of his career. Barcia also made an impressive recovery to finish fourth. Tomac was credited with 36th place. 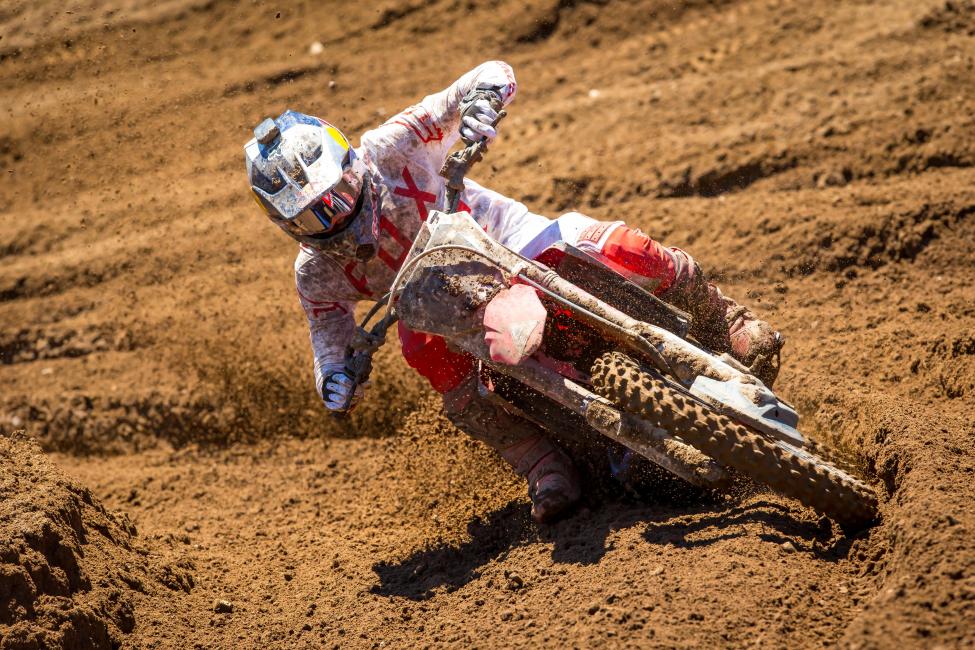 The final moto of the afternoon saw Autotrader/Yoshimura/Suzuki Factory Racing’s Justin Bogle capture the Motosport.com Holeshot by edging out Harrison and Roczen. The opening corners saw Musquin use aggressive riding to force his way by the front-runners and take over the lead. At the completion of the opening lap it was Musquin, Roczen and Barcia rounding out the top three, while Tomac was credited with 18th after being forced to start on an outside gate due to his Moto 1 finish.

Musquin wasted no time in setting blistering lap times as he led the way out front and began to open a small cushion over Roczen, who kept Barcia behind him. Roczen continued to push his way forward and closed back in on Musquin, but each time he bridged the gap, the Frenchman managed to pull back out.

There was no stopping Musquin, who kept a steady pace out front to capture his third moto victory of the season by 3.9 seconds over the field. Barcia pushed the entire 30-minutes-plus-two-laps to overtake Roczen on the final lap for second. Roczen crossed the finish line in third. Tomac overcame multiple crashes and a brief visit to the mechanics are to finish ninth, while first moto podium finisher Bloss could only muster 23rd after a crash.

The second moto win gave Musquin the overall win (2-1), edging out Roczen (1-3) in second overall. Barcia’s 4-2 scores were good enough to take the final step of the podium in third. Tomac earned the worst finish of his 450 Class career in 15th (36-9). 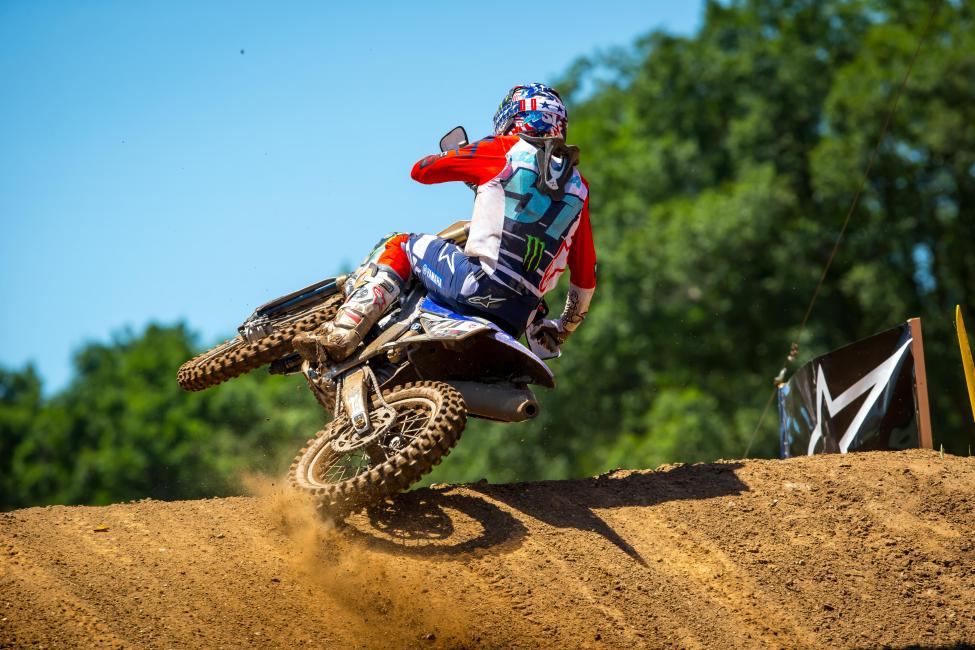 Justin Barcia’s riding was impressive all day as he netted 4-2 moto scores for third overall.

“I certainly didn’t expect to leave RedBud with the points lead,” said Musquin. “What a crazy day. I couldn’t believe when I saw Eli [Tomac] off of the side of the track in the first moto. Consistency was key today, the track was tough, and I managed to leave here with two good moto results. The fans are insane here and it’s amazing to get the win.”

The 450 Class received a change in the point standings for the first time this season as Musquin’s win lifted him to the top of the championship. Tomac, who entered the day with a 33-point advantage, now trails Musquin by three points. Barcia is third, 40 points out of the lead. 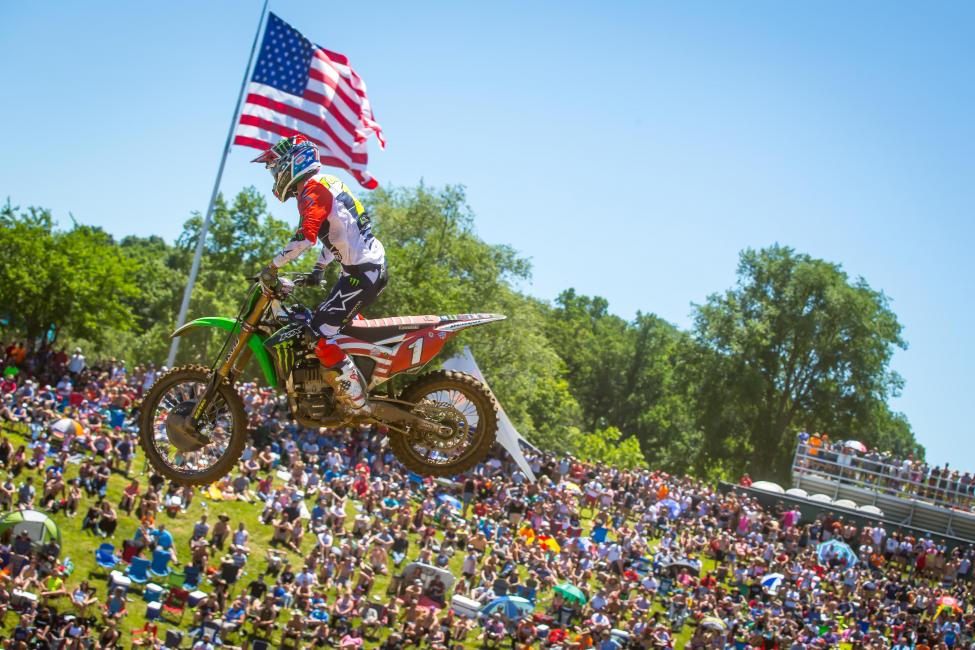 The opening 250 Class moto saw Monster Energy/Pro Circuit/Kawasaki’s Austin Forkner emerge with the Motosport.com Holeshot ahead of Troy Lee Designs/Red Bull/KTM riders Shane McElrath and Alex Martin. As the 40-rider field charged through the opening corners, McElrath powered his way to the front with Forkner and Plessinger battling over second and third.

While McElrath controlled the race early, Forkner and Plessinger continued their fight for second, with Plessinger using LaRocco’s Leap to jump past the Kawasaki rider. Plessinger consistently clicked off laps and began to distance himself from Forkner, while also closing in on the lead. He used the same move on LaRocco’s Leap to seize the top spot from McElrath. Forkner soon followed into second.

With 10 minutes remaining, Forkner found himself gaining momentum as he moved onto the rear wheel of Plessinger in the hunt for the win. Just one lap later, Forkner made the pass, however, it would be short lived as Plessinger instantly retaliated with an aggressive pass that sent Forkner to the ground. Monster Energy/Pro Circuit/Kawasaki’s Joey Savatgy and GEICO Honda’s RJ Hampshire moved into second and third, respectively.

As Plessinger continued his impressive ride out front, Savatgy made a costly mistake through the sand rollers on Lap 12 that left the Kawasaki rider on the ground, which moved Hampshire to second and McElrath back to third. With just two laps remaining, Monster Energy/Yamalube/Star/Yamaha’s Dylan Ferrandis joined the battle for third and muscled his way around McElrath.

Plessinger held on to take the checkered flag for his fifth moto win of the season by 10.2 seconds over Hampshire, who finished on the podium for the second time this season. Ferrandis completed the top three in third. 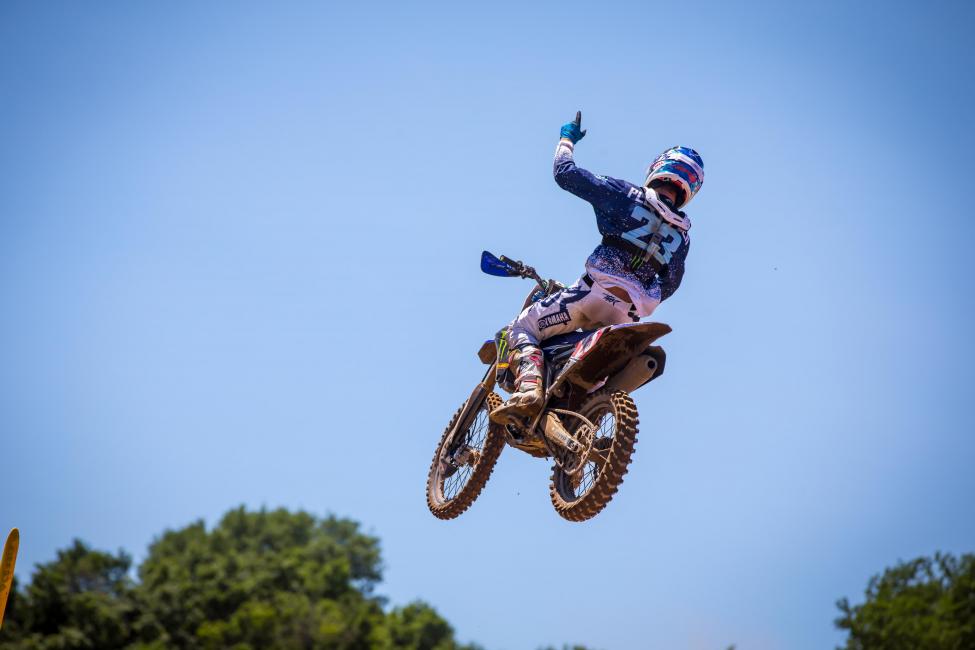 Aaron Plessinger swept both motos to take his third victory of the season.

In the final 250 Class moto it was Rockstar Energy Husqvarna Factory Racing’s Mitchell Harrison who emerged with the Motosport.com Holeshot, followed by Plessinger and Savatgy. A pileup in the first corner collected several riders, including first moto runner-up Hampshire and McElrath. At the completion of the opening lap it was Plessinger in first, with Savatgy and Harrison in tow.

Plessinger controlled the pace out front, but the battle behind him raged as Savatgy pressed forward in an attempt to fight off of the pressure from teammate Forkner and the KTM-mounted Martin. As the trio closed in on the halfway point of the moto, all three were separated by less than a second and searching for a way past one another. Martin and Forkner worked tirelessly and eventually found their way around Savatgy, while Forkner continued his march to the front and blitzed by Martin for second.

As the checkered flag waved, Plessinger maintained his lead in the final laps to take his sixth moto win of the season by 5 seconds, sweeping both motos for the third time this season. Forkner rebounded from his first moto troubles to finish second, followed by Martin in third. 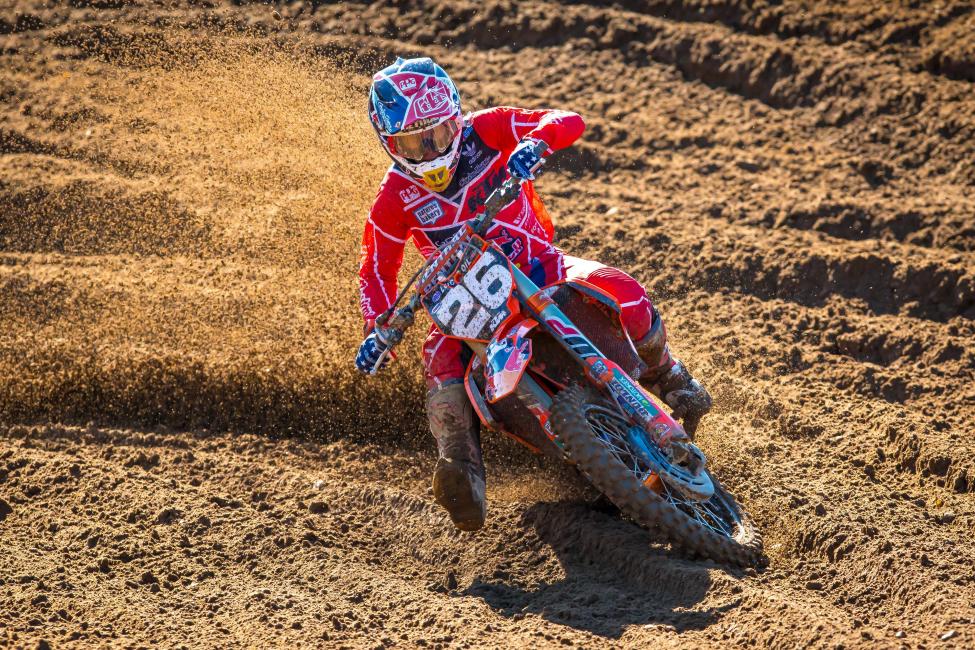 Alex Martin battled to second overall on the day (4-3) and maintains second in the championship.

The 1-1 moto scores gave Plessinger his third win of the season and the fifth victory of his career. Martin used consistency to secure second overall (4-3), which edged out Ferrandis in third (3-4).

“The last few races following Muddy Creek have been tough,” said Plessinger. “My confidence took a bit of a hit with some of the issues I had, but the starts are super important and today we proved where we belong when we get starts. I like this track and I’ve never actually been on the podium here before, so this is cool with the Motocross of Nations coming up here in a few months.”

Plessinger’s victory extended his lead in the championship standings, which now sits at 35 points over Martin. Monster Energy/Yamalube/Star/Yamaha’s Justin Cooper, who finished fifth overall (8-7), moved into third and trails Plessinger by 82 points. 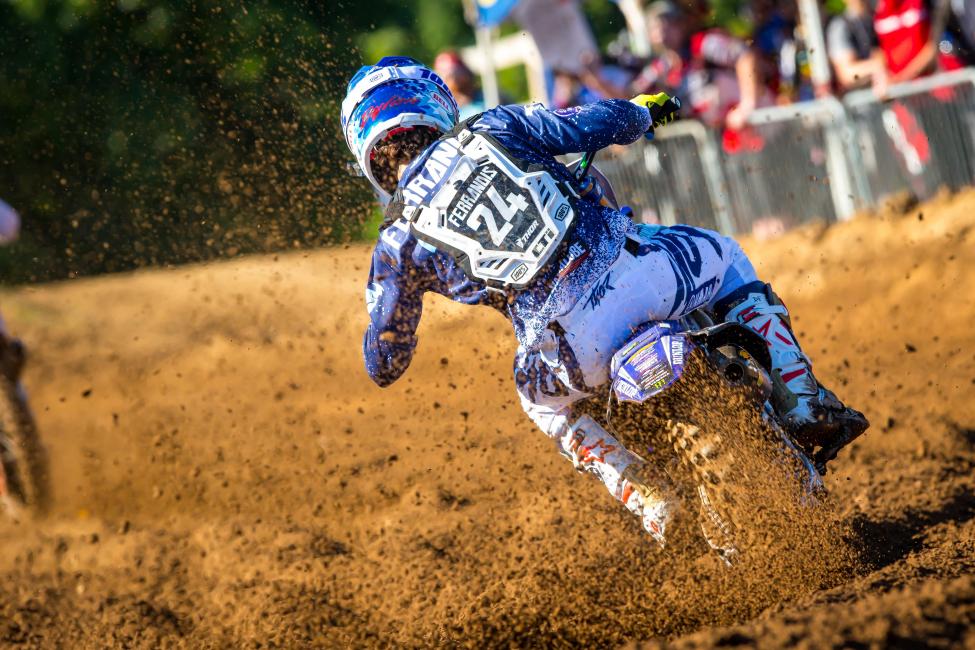