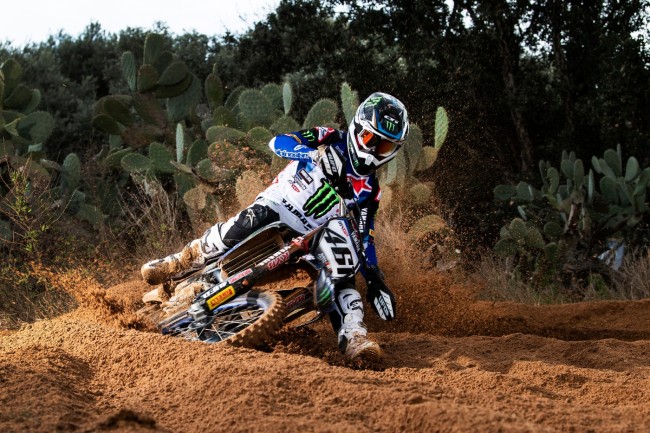 Romain Febvre won the battle with Tim Gajser to take the first race win of the year in MXGP at the fast and flowing Patagonia’s circuit in Argentina.

The Frenchman was pressuring the race leader, Gajser, who had taken the holeshot and led most of the race, until he tipped over and handed Febvre the lead who was right on his tail.

Gajser then had a huge crash in the waves section and rode around the last couple of laps to take ninth but looked very banged up.

But it was terrible race for Tony Cairoli who suffered an awful start but was about to make his way into the top ten when his bike expired just after he passed Pauls Jonass for 11th. Cairoli walked off dejectedly after a rare Red Bull KTM breakdown and will start from the far outside tomorrow.

Praise is deserved for a very rapid Jeremy Van Horebeek who looks back to form on the privateer Honda with a third with Max Anstie strong in fifth coming through the field.

In MX2 Jorge Prado took his predictable holeshot but this time his rivals didn’t let him pull away! Henri Jacobi and Thomas Kjer Olsen battled each other and reeled the Spaniard in before Jacobi and Prado had a hard battle for the lead until Olsen pounced and passed the both of them with Prado dropping to third!

Prado re-grouped and put an aggressive brake-check on Jacobi that left the German off the track and back in third place at the flag with Prado second and a very happy Olsen in first, Ben Watson didn’t get the start but made his way into fourth – but he can’t let the leaders get away tomorrow!