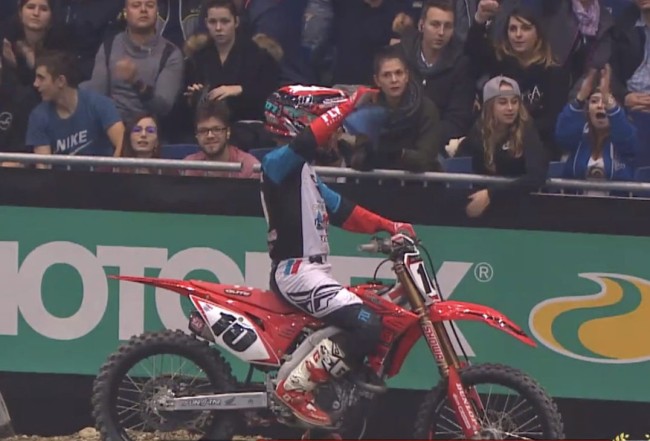 Justin Barcia led from start to finish to win night two of the Geneva supercross and put his incident with Christian Craig in the head-to-head behind him.

Indeed, it was Craig who came out of turn one second behind Barcia after a first turn incident claimed both Osborne and Seely, with Osborne clutching his back and not continuing as Seely came back to seventh.

Craig couldn’t quite stay with Barcia despite his efforts and was eventually passed for second by Justin Brayton. Brayton caught Barica but couldn’t find a way by and eventually settled for second and the overall win with a 1-2 score over the two nights to win the King of Geneca for the fifth time.

“That was awesome,” said Brayton on the podium. ”I came from so far back, I don’t know what’s wrong with my starts, it made it hard on me but I knew what I had to do to get the King, that was the goal, it’s awesome to win my fifth Geneva supercross.”

”it was a really good race, JB was on me the whole race and I had to ride super smooth and not make any mistakes, said Barcia on his night’s win before adding, “I had a crazy little catch-up with Christian, it was a little bit much but it was fun and we are on good terms,” in reference to the crash during the head-to-head that you can see below in what was the biggest talking point of the night.