Race report and highlights: SLC7 – What a night of racing! 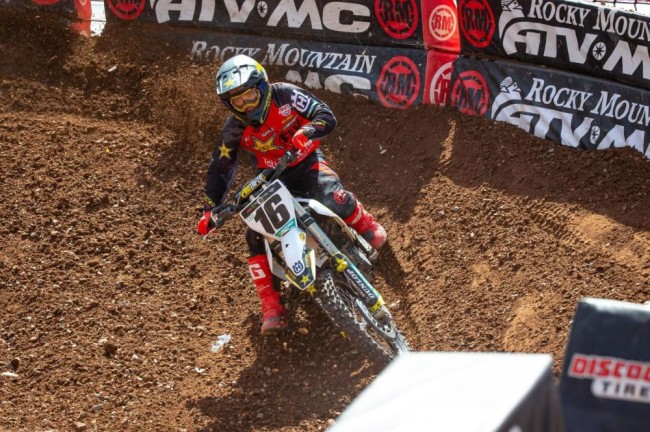 Monster Energy Kawasaki’s Eli Tomac earned his first Monster Energy AMA Supercross, an FIM World Championship Title in the 450SX Class at the season finale, Round 17 Presented by the Utah Sports Commission inside Rice-Eccles Stadium. Tomac won the title by 25 points after a smart ride to finish fifth in the race. Rockstar Energy Husqvarna Factory Racing’s Zach Osborne won the event, taking home his career-first 450SX Class victory. Second went to his teammate Jason Anderson, who led 15 laps of the 25-Lap Main Event. Rounding out an all-Husqvarna and team podium, Dean Wilson turned an early lead into his first podium of 2020, the second of his career. 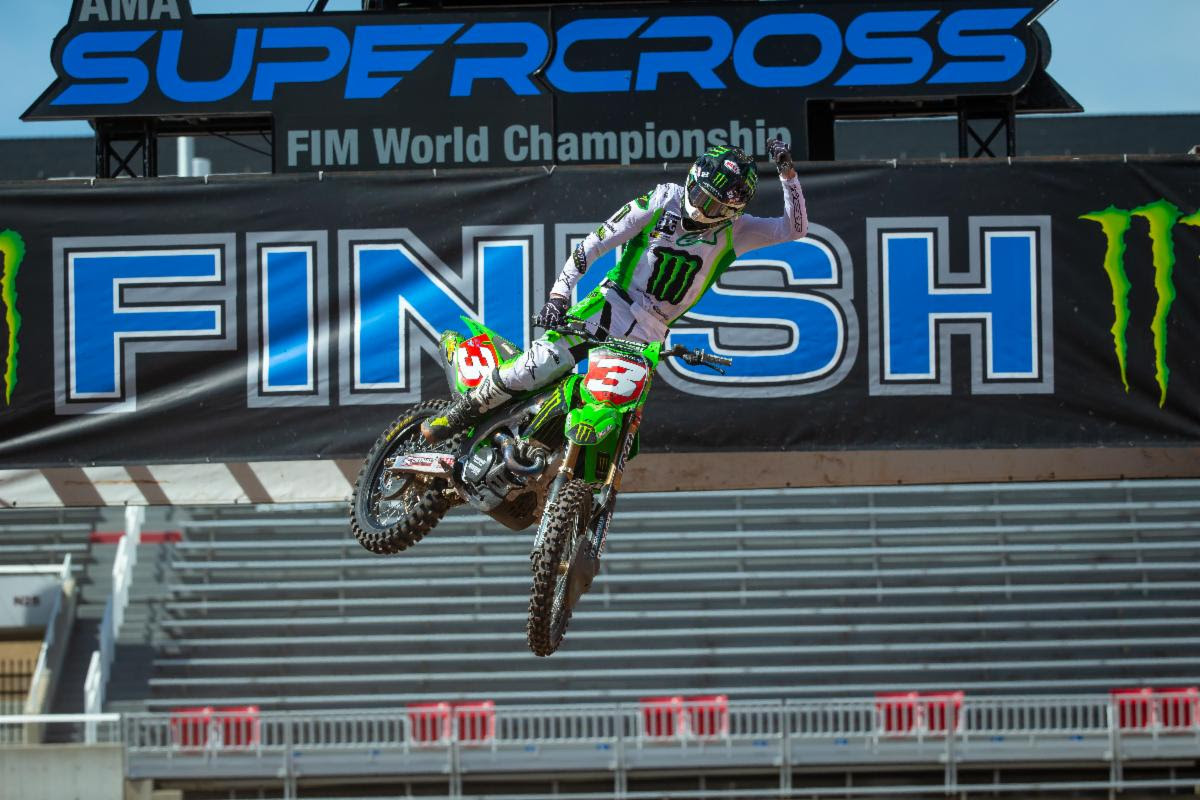 The tension was high for Tomac to deliver his first 450SX Class title in his seventh year in the class and after three second-place season finishes. Off the start, Dean Wilson got into the lead and ahead of his two Husqvarna teammates Anderson and Osborne. Tomac crossed the holeshot line in ninth position. The only rider still with a mathematical shot at the title, defending-champion Red Bull KTM’s Cooper Webb, was knocked over by another rider and started the race picking his bike up off the ground in the first corner.

Tomac slowly moved up the leader board. Webb recovered from his tip over but never caught up to Tomac. After sliding out on the opening lap, Team Honda HRC’s Ken Roczen split the two title contenders for the rest of the race. Roczen never broke free of Webb with enough positions to make up the points deficit he had on the second place spot in the points. Up front, Anderson wrestled the lead from Wilson six minutes into the 20-minute plus one lap event; immediately after that Osborne took second place from Wilson. Osborne got within striking distance a few times, but it wasn’t until late in the race, when Anderson’s seat had been pulled off his bike, that Osborne made the pass with just over one minute on the race clock. The three Husqvarna riders swept the podium, followed by a career-best fourth place finish from Smartop/BullFrog Spas/Motoconcepts Honda’s Malcolm Stewart. Tomac crossed the line fifth, as the 2020 champion. 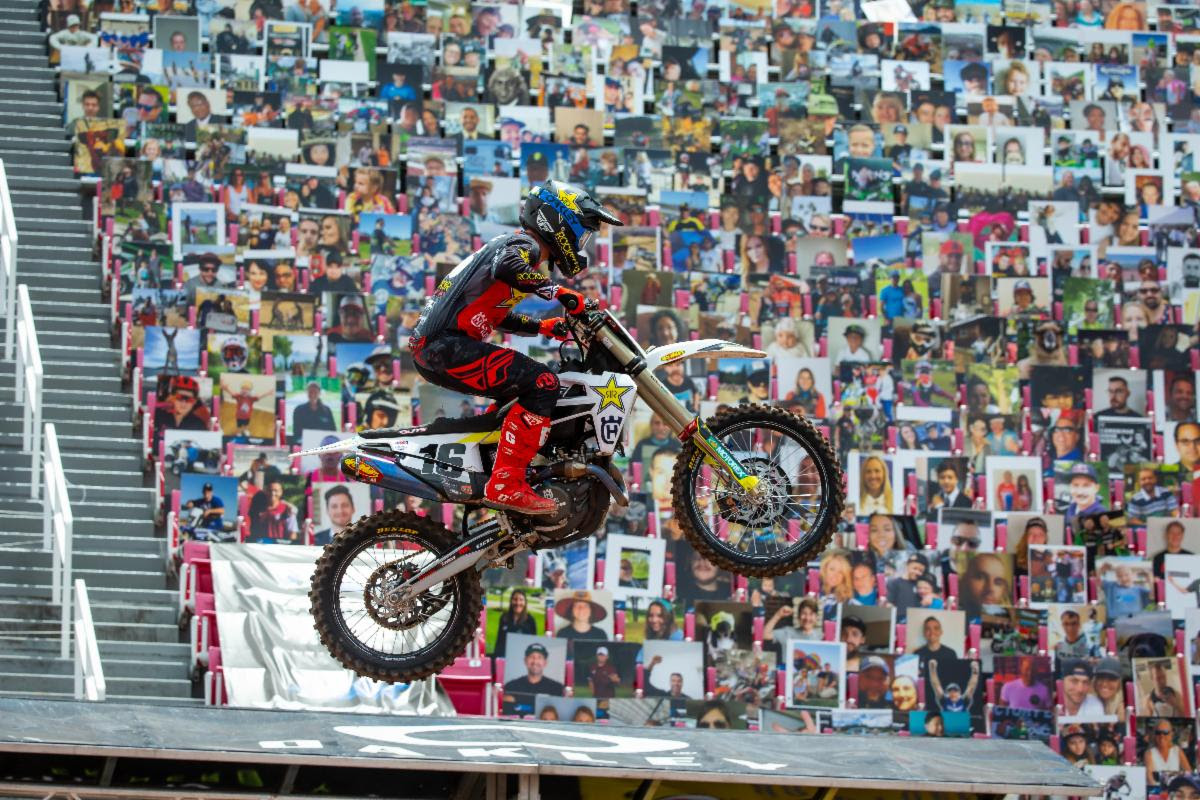 The win marked Osborne’s first 450SX Class victory, as well as the first time inside Rice-Eccles Stadium that a 450SX rider has taken his first win. It also gives Husqvarna its first win of 2020 and brings the total number of race winners this season to five. Breaking records with his fifth place finish, Eli Tomac, at the age of 27, became the oldest rider to win his first 450SX Class championship, the first rider with 30 or more wins to earn his first title, and the first father to win a first Supercross premiere class title – fitting that it happened on Father’s Day. Another dad having a big day, Mountain Motorsports, cbdMD, CR22 Racing’s Chad Reed earned a top-ten finish in what likely is his final professional race. He has started more 450SX Class Main Events than any other rider, and the 2020 finale marked his 265th start.

Upon being presented the championship number one plate, Tomac said when asked about the unorthodox series, “Just unbelievable circumstances. I just always think back to the whole of this lifetime worth of riding, and just going through everything. The failures with the team, coming here, with the whole COVID going on right now. So pretty unbelievable. There was a time we didn’t even know if we were even going to ride or not between Daytona and this swing of the series. And it’s finally here and, unbelievable!”

Taking the trophy for his first 450SX Class win, Osborne said, “I feel amazing. That was a good race for all three of us Rockstar Energy Husqvarna Factory racing bikes. I actually lost a side panel about six minutes ago, so I was done if Jason didn’t lose the seat there. So, I got a little bit lucky but man, it feels amazing to get some results here at the end of the season for my team. I just have to give it up to the good Lord for keeping me safe; I had a big one [crash] in practice this morning, basically missed the whole second practice. That’s normally a game changer on race day but I was able to turn it around. And we lost a really valued co-worker at Husky yesterday, and this one’s for him.” 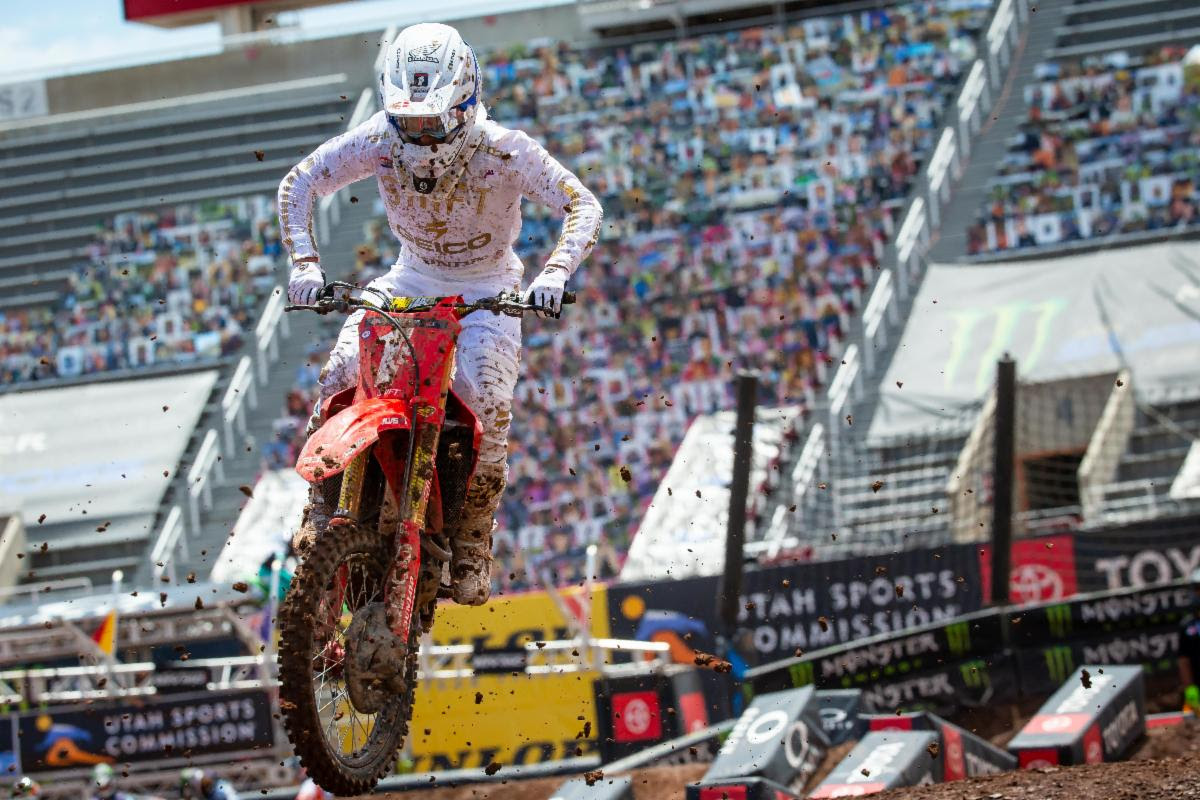 In 250SX Class racing, the East/West Showdown, which pits riders from each region in a points-paying finale for both championships, provided excitement all day long. In the Eastern Regional 250SX Class Heat Race, defending champion and points leader Chase Sexton landed beside Monster Energy/Star Yamaha Racing’s Colt Nichols; their handlebars made contact. Sexton went over the next berm but remounted to finish the Heat Race in second. Nichols limped his bike to the finish but did not return to the Main Event due to a reported wrist injury.

In the Western Regional 250SX Class Heat Race, defending champion and points leader Dylan Ferrandis fell after rider contact in the second corner. He finished one spot out of qualifying, sending him to his first Last Chance Qualifier; there he earned his spot in the Main Event with a win.

The East/West Showdown started in dramatic fashion, with the points leader in each division getting a mid-pack start. Monster Energy/Star Yamaha Racing’s Shane McElrath got quickly into the lead with Monster Energy Pro Circuit Kawasaki’s Austin Forkner right behind. Both riders up front were sitting second in their division’s point standings. But two minutes into racing Forkner went down hard, putting him out of the race and forcing a red flag and a full-race restart.