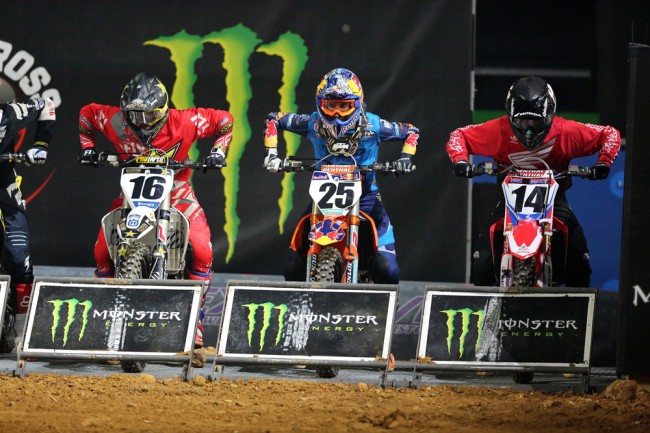 1. Magnificent Musquin – The Frenchman was superb all weekend – even if Aldon Baker wasn’t a big fan of his rider’s couple of mistakes! However, one of the biggest strengths Musquin had was his ability to put the mistakes behind him and reel off a fastest lap to make the gap again to second place. After Seely beat him in the sprint race on Sunday, then pressured Musquin early in the main event, it looked like Seely would go on to win, but Musquin re-grouped, found his flow again and steadily pulled away. Musquin showed his mental strength right there to take the win – giving him his third big pre-season win in a row and lots of confidence going into A1.

2. Smooth Seely – Cole Seely was looking good in Paris. He has exceptional technique on a supercross track and is very smooth – a great watch for any aspirating supercross rider. Seely isn’t long back on the bike after hand surgery to take metal out of a broken knuckle but his speed was good even if he didn’t quite have the stamina of Musquin. But his whoops speed was superior to the Frenchman and with six more weeks to get prepared for Anaheim Seely should be pleased with where he at this early into his supercross preparation.

3. Wilson’s podiums – Dean Wilson is loving the pre-season races! Three podiums in a row from the MEC to Australia and now Paris is giving Wilson his confidence back indoors. Wilson has been traditionally knowns as more of an outdoor guy but he was gunning for Musquin in Paris and showing extra intensity in the turns and an aggressive passing style when needed to go for the win.

4. Osborne’s 450 potential – With only four or five days on the 450 in supercross form, Zach Osborne very nearly made the podium against the 450 regulars in Paris! We all know Zach can ride a 450 outdoors from his time in the British championship, and Zach will indeed make his 450 move in the USA in the outdoors next season, but indoors is a different ball game. However Zach showed that he can transfer his skills very well to a 450 in supercross.

5. Supercross setting – The new U-Arena has elevated the Paris supercross to a legitimate AMA style supercross track that packs 22,000 fans and creates an almost authentic US experience with a heavy French flavour of course! The format of superpole, two sprint races and a main event – all contributing points was great and gave fans plenty of action from the top stars. It makes it perfect for AMA supercross preparation and with rumours abound that Feld want to make it a global series, could the U-Arena be a viable option for a round of the full blown World supercross series in the not to distant future?