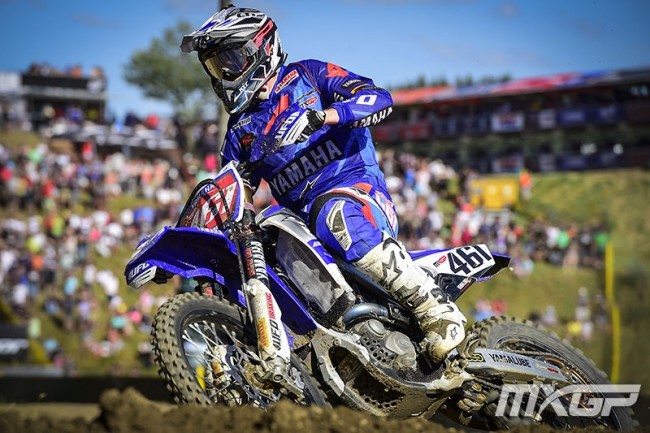 Romain Febvre is living the dream right now. Another double win and an 88 point lead in the championship, the Frenchman will become the 2016 MXGP World Champion barring injury.

Put simply, Febvre is dominating the championship on the hard pack. Give the Frenchman a slick track and he is the fastest rider in the world right now. His confidence is at an all time high, and he can put the bike anywhere he wants as he demonstrated at Loket on  another hilly, slick technical track.

Febvre won race one going away, then won race two coming from sixth, including passing Paulin, Bobreyshev and a determined Desalle to do it. Febvre’s entertaining and aggressive battle with Desalle was the highlight of the MXGP racing when the Frenchman ran it in hard on the Belgian, but Desalle did likewise with Febvre and the championship leader claimed after that he really enjoyed the close aggressive racing.

Once Febvre made the pass stick however, he was gone again. There is just no stopping the kid right now.  Of the five GPs remaining Lommel this weekend should be his toughest track but with the confidence he has right now he should among the leaders again. Anyone else excited for Dungey v Febvre at the USGP?!

Second overall was Evgeny Bobreyshev. It was another very good performance by the Russian who is finally learning to harness his speed with more control. JMB seems to be having more success with improving Bobby than Paulin right now! So much so that Bobreyshev is up to fourth in the championship only 20 points behind his more illustrious teammate who had another bad day with seventh overall on a track that should have suited his style perfectly.

Paulin’s confidence looks shot but with the deep sand of Lommel next he might just be able to rebound like he did at Valkenswaard earlier in the season with a double win. Paulin seems, strangely, more comfortable on the Honda in the sand that the slick tracks he grew up on in France. The stylish Frenchman remains the mystery of the season for sure.

Clement Desalle was back with a smile but a heavy heart and admitted he is still sad about getting injured when it looked like he was in position to win his first world title. But Desalle is a tough guy, and despite not many practice sessions prior to his comeback, put his Suzuki back on the podium just like he had been before the injury.

Behind Desalle were two more Belgians, Kevin Strijbos loves Loket and took fourth overall but would have wished for better starts. Jeremy Van Horebeek won at Loket last year and was expecting a podium but still rode well for fifth.

All three are riding well and could be a formidable MXDN team for Belgium if Van Horebeek could be persuaded to ride the 250f.

Shaun Simpson was sixth overall and yet again produced two solid motos, letting others make mistakes around him while staying solid as a rock. Simpson will get increased factory support from KTM next season but it will still be in a privateer team, as Pit Beirer feels that is how to get the best from the Scotsman. Simpson will also get a 2016 factory bike to race at Unadilla in two weeks time thanks to Roger Decoster!

Just about one year after breaking his femur the unbelievably unfortunate Jeffrey Herlings dislocated his hip costing him his second title in a row.

It was a heart breaking moment for the Dutchman who suffered his third injury in three rounds after his broken collarbone in Germany, and severed finger in Sweden. This time there will be no more comebacks in 2015 but Herlings has vowed to return with vengeance in 2016.

It his left the championship wide open with Tim Gajser, Valentin Guillod, Jordi Tixier, Pauls Jonass Jeremy Seewer and even Max Anstie with a shot at the title!

In the first moto all six where going at it hard and it was Gajser, the man effectively leading the championship in Herlings absence, who made the mistake. The HRC man clipped the bank and crashed but left Seewer nowhere to go as the Suzuki man rode straight into the Honda and over the bars. The end result was a DNF for Gajser and poor finish for Seewer.

With Anstie winning the moto, Guillod second and Tixier third it left the championship even more wide open that before!

In moto two Anstie got out front again but had pressure from Gajser and Guillod. Then, all of a sudden, Anstie lost traction and went over the bars and down hard in the waves section. Anstie was out leaving Guillod to battle Gajser for the win.

Guillod after some serious pressure finally made the move and won the race and the GP, giving him three GP wins this season.

But more importantly it means the points lead (ignoring Herlings) is now shared between Gajser and Guillod with both on 399 points with five rounds to go!

KTM back up man Pauls Jonass was second overall and is only ten points behind the duo – KTM still have a shot at the MX2 world title and teenager Jonass loves the sand tracks coming up!

Defending championship Jordi Tixier wasn’t happy with his riding in Loket, but like Jonass is very good in the sand and is only 29 points back of the lead. Despite being banned from the Argentine GP Tixier has still got a big shot at winning his second world title!

Jeremy Seewer is the quiet kid in all of this but sits 30 back, making it five riders within 30 points going for the title!

Max Anstie was looking right back in the hunt until his crash but is now 62 back, although with the sand tracks and Glen Helen coming up, Anstie could be winning more motos and keeping his fingers crossed!

So who is the favourite? I think you still have to look at Tim Gajser. Despite being just 18, Gajser has the most talent and isn’t usually fazed by pressure (despite his mistake at Loket). But Guillod is in the form of his life and this is his last chance at an MX2 title, he will do everything to win this! Jordi Tixier has the experience of going for a title while Jonass and Seewer have the least pressure in comparison and could surprise.

So, now we head to Lommel with everything to play for. For Guillod and Gajser this is their worst track on the schedule historically, while the other contenders love the sand. It will be all about who can step up to the plate and survive the pressure – it’s game on for the MX2 world title!