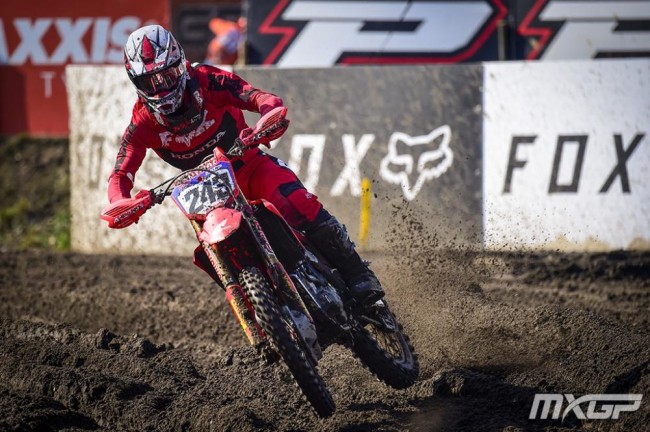 Gajser’s sand speed! WOW! Even Jeffrey Herlings was a shocked at the speed of Tim Gajser in the sand! The Slovenian blew everyone’s mind in race one with an amazing ride to win from the last gate pick and backed it up by pushing Herlings all the way in race two. Outside of Gajser himself and the HRC Honda team, I’m not sure many across the globe expected Gajser to run that pace in the soft stuff! It was an amazing performance and proves just how badly Gajser wants to prove he can beat Herlings in 2020. This might just be the best version of Tim Gajser we have ever seen.

The weather: They got away with it in the UK and, on Saturday it looked like they would get away with it again in Valkenswaard but Sunday the rain finally came and made the racing very tough for the riders and not easy for the spectators either! A strong amount of fans were there to cheer on the riders and they deserve a lot of respect but that was some brutal hardcore motocross racing out there over the weekend. But that’s what you have to get through to be the best in the world after 20 diverse Grand Prix events around the world, right?

Dangerous first corner? You always hold your breath around that S-bend at Valkenswaard! It just doesn’t feel safe, especially when a committed top tier rider like Gajser is risking it all from the outside in both motos. He got away with it this year but another year it could have been carnage. We saw Coldenhoff get his legs stuck in Desalle’s rear wheel, Prado went down hard and was very lucky not to get run over and badly injured. Geerts went down big and then got hit by Haarup, resulting in the Dane having to DNF. Yes, all first turns are dangerous but the way it funnels into that tight S-bend from a wide start is pretty scary.

Geerts digging deep: The quiet Belgian lost his grandmother on the Thursday but still won race one and chased Vialle down to do it. But the ride from dead last in race two, when he was close to a lap down in race two was simply brilliant and one of the lasting memories of the 2020 Valkenswaard GP along with Gajser taking it to Herlings. Geerts doesn’t say much off the track but he let his riding do the talking and showed his heart and determination to come back when it really mattered.  He was going six seconds a lap quicker than his rivals in the second half of the race, the weather didn’t matter, the injured ribs didn’t matter, he just wanted to pass as many riders as he could. Geerts showed then and there his true potential and how badly he wants to win this world championship, Belgium have a huge star on their hands if he can find anything close to that form every week.