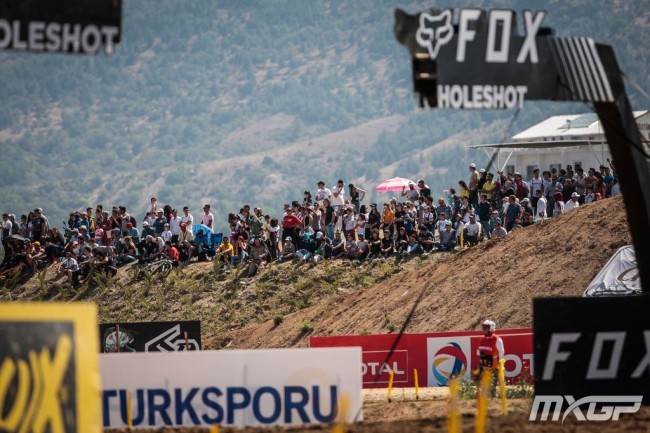 Battles galore:  Despite Turkey being a long travel for the team’s the entries in the MXGP and MX2 classes were very respectable compared to the past. The top 23 riders in each class were all quality. The man made track produced battles throughout the field in both classes which was fun to watch. Particularly in MX2 there was plenty of duels between the young guns.

Tough track: This was the second trip to the Afyonkarahisar track. Last year the track was very fast and didn’t get as rough. This year, despite it being fast it was slower than in 2018. The track crew decided to rip part of the tracks this year but didn’t rip it quite as deep for Germany as example. It helped create some good lines and formed some pretty nasty breaking bumps as a results. At the start of the season the Youthstream track crew were doing too much track prep which meant tracks weren’t getting as rough as they should be. However, since Loket it’s been much improved and it feels like the tracks are getting as rough as they should be again – progress!

EMX riders stepping up: There were a few EMX riders that made the step up to race MX2 in Turkey to prepare for 2020 and the young guns are fast. Roan Van De Moosdijk was superb as he battled hard for his first GP podium with a third overall. Italian, Alberto Forato despite bad starts rode well for eighth overall. Young EMX125 champ, Mattia Guadagnini has only been riding a four stroke for a few weeks and ended up tenth overall – impressive. Make no mistake about it, the new generation coming through are fast.

EMX2T and WMX – Poor entries:  Six riders in the EMX2T class, yes you read that right – six! Honestly, that’s embarrassing for our sport. I don’t have a problem with the EMX2T classes heading to Turkey but Youthstream need to pay for the teams to go otherwise it’s a bit of a joke! The WMX entries weren’t much better with eleven behind the line.