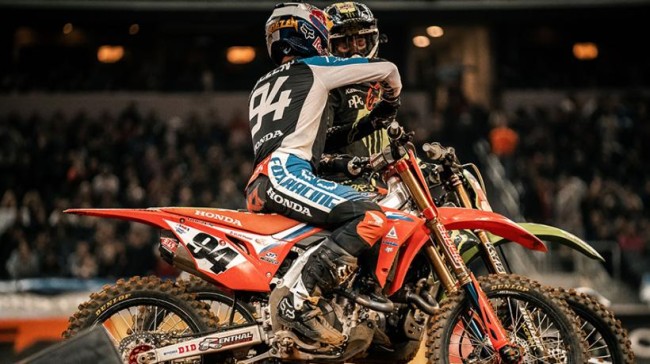 It was a wild night in Arlington with two of the top six in the 450 supercross championship crashing out on the same obstacle with Cianciarulo breaking his collarbone in practice then Webb having a huge spill in race two. Fortunately Webb will be back this weekend, somehow only battered and bruised after summersaulting onto the concrete.

It sparked comments from podium men Anderson, Tomac and Roczen, none of whom were fans of the dragon’s back.

The top three 450 men on the night gave their view and none of them like the way it was built, with Roczen saying: “I already saw on press day on track walk that they have five whoops on the dragon back and then the fifth one is the lowest one out of all of them. You hit all four of them then all of a sudden your front wheel goes over the last one and al you do is hit it with the back wheel and it ate up Adam and then, I didn’t see Cooper’s crash but it ate him too. I’ve seen it happen multiple times, but I don’t know what the thought process is behind there because you want the last one to be obviously the tallest one, that’s the whole point of it. Then also they are breaking down because it is soft.”

While Anderson commented: “I also think they are so small that you can go so fast through them and you can get ahead of yourself and obviously we are trying to go as fast as we can and just that split little bounce to get over the top one, obviously it can eat you up.”

Tomac concurred, saying: “I am with these guys, I don’t understand why they build the last one lower than the first four, it seems like they have done it multiple times. You want to sit there and scratch your head. You want to hit the last one but they make that thing low, it’s not good, you see the crashes.”

Jason Anderson showed what he could do as he came the closest he has to a win all year but Eli Tomac seemed to really establish himself as the guy to beat with Roczen there to pick up the pieces.

Tomac didn’t have great first main and, with Roczen winning it looked like the German would be able to apply the pressure along with second-place finisher Webb, but with Webb crashing out of race two and Roczen suffering a terrible start, Tomac re-established himself as the guy to beat with an easy win before passing Roczen and Anderson to win an exciting race three to take an very important overall win.

Webb is now 26 points back and relying on a mistake from Tomac, while Roczen, only seven points back is still in the fight but, understandably after all his injuries, seems to be riding more cautious than before and taking less chances when the chips are down that Eli is. When he really needs to push the pace, can he push Tomac to the edge? That is the big question as the 2020 supercross title as it appears to be down to two men after a tough night for many in Arlington.