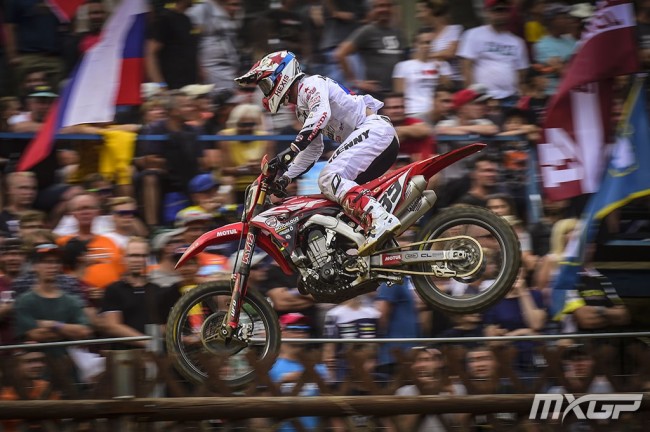 8th position in 2019 MXGP with a podium finish and six top five moto results was perhaps more than former FIM world championship runner-up Jeremy Van Horebeek expected with a privateer CRF450R and the Honda SR Motoblouz team; a squad that made a late decision to contest the entire GP series.

The Belgian had been a works rider with KTM, Kawasaki and Yamaha from 2011 and found himself in the unfamiliar position of fighting against the might and resources of factory efforts. Despite the challenge – and an early season shoulder injury that saw him competing towards the rear of the field for five rounds – Van Horebeek insists he is ready to tackle the odds again in 2020.

“It has been a great season,” he commented at Assen for the Motocross of Nations where he again achieved podium success with Team Belgium. “I was unlucky in Arco [Di Trento] to break the engine over a jump and had a big front flip. My shoulder really wasn’t good after that. I tried to come back after the long mid-season break but I went from struggle to struggle and lost some of the motivation and the trust. But step-by-step results got better. It is simple: if I start top-five then I stay there.”

“I think we will have some more support budget-wise from Honda Europe but no parts,” he admitted on the set-up for 2020. In a sense Honda operate as two entities in MXGP: HRC and the factory team and then Honda Europe supported operations like 114 Motorsports, and Assomotor. There are separate budgets and technical support for both strands. Van Horebeek’s MXGP plans were formed too late for Honda Europe to react efficiently in 2019 but Honda SR Motoblouz could benefit from their bright showing for 2020, although the factory kit used by the likes of world champion Tim Gajser and incoming rookie Mitchell Evans is off-limits.

“At the moment what we have is stock, with a pipe and suspension,” JVH added. “That is kind of a difficult thing…but I think next year we can have a little step. I think we can have another year with Josse [Sallefranque, Team Principal] and ride Le Touquet. I will be going for a full sand season again. I guess it will tough; it will be two years non-stop! That’s why I tried to find good solutions with the team and it seems to work well.”

Van Horebeek’s speed and results proved that a privateer effort can cut a standard in MXGP, and for a level of racing where the technical preparation and professionalism of the riders is constantly pushing new heights. “The only struggle was with the start….but I was on a factory bike [before] and it was not much better,” Van Horebeek reveals. “Today the start is the main thing and if you do it good then you can run upfront. I’m really using a stock engine and suspension – if people don’t believe it then that’s their opinion – and I believe you can do great things. A little more help would be even better. To be honest I had a fun year. Even with my long career I still learned a lot from 2019 and I’m ready for another season.”