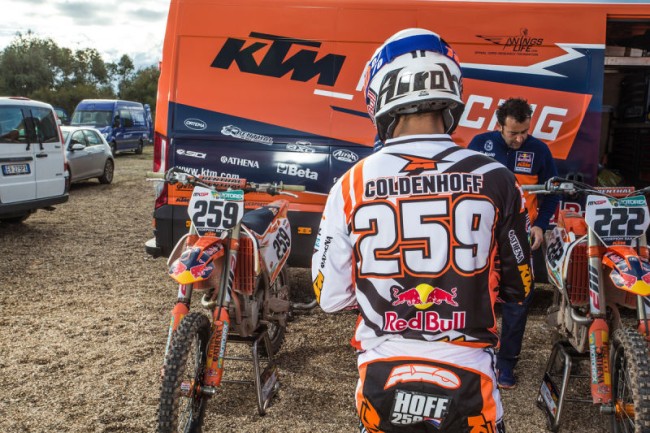 The 2019 Dutch Masters of Motocross will start in Axel this weekend. The championship as it often is will be well represented again in 2019. It makes the series one of the strongest motocross competitions in the world. With a new competition format, a fantastic organization and a hefty prize pool, it promises to be a spectacle.

Reigning MXGP World Champ, Jeffrey Herlings cannot participate due to a foot injury. It’s a shame but also means that the battle for the title is completely open. Many MXGP top riders have switched to other teams for this season. It makes the racing earlier in the season even more exciting.

The Netherlands is well represented in Axel thanks to riders such as Glenn Coldenhoff on the Standing Construct KTM, Brian Bogers on the HRC factory Honda, rising star Kay de Wolf on the factory Husqvarna 125cc and Davy Pootjes on the 250cc Diga Pro Cross Husqvarna .

The other big names on the list of participants at the Dutch Masters of Motocross 2019 are strong. The first round will again be a true ‘mini Grand Prix’ of top riders in all classes. Max Anstie, Gautier Paulin, Arnoud Tonus, Calvin Vlaanderen, Henry Jacobi, Adam Sterry, Jago Geerts (2018 250cc class winner), Thomas Kjer Olsen and so on!

And what about Nancy van de Ven! The multiple vice world champion with the ladies is very fast and Axel is her home race. That promises to be something as she’s behind the starting field full of men in the 250cc class.

In 2019, a good number of young riders will switch to the bigger machine from the 85cc. It’s always interesting to see how the boys are doing with a completely different engine than they’re used to. For example, Liam Everts (indeed ‘the son of’ Stegan), Kay Karssemakers and Kay de Wolf are switching to the 125cc machine. Also in the 250cc class we will see Raivo Dankers, Raf Meeuwissen and Rick Elzinga on their brand new machines for the first time.

During previous editions, drivers qualified for the Dutch Masters via the Open Dutch Championships. In some cases, this caused some confusion or was not entirely fair. That is why the KNMV is now introducing a similar concept to the MXGP for the race in Axel. The drivers must prove themselves on Saturday during the qualification and finish in the top forty (250cc and 500cc) or fifty (85cc and 125cc) fastest. Only then will they qualify for the competition day. This means more action and a fairer starting field! The best riders in the world are already assured of a place behind the starting gate.

At the second round in Oss (April 14) and the third round in Rhenen (May 30, Ascension Day), the best ten riders from the DMoMX intermediate position and the best forty riders from the ONK Motocross are qualified. For the final during the Zwarte Cross (19 and 21 July), the top forty in the DMoMX standings are invited in every class.