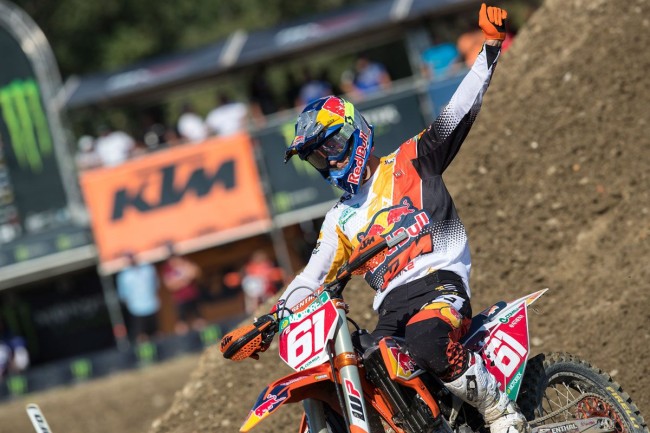 For the second year a compact temporary layout in the confines of the historic Autodromo Enzo e Dino Ferrari was the setting for the Grand Prix of Italy. Hot summer weather graced the fifteenth round of nineteen and decent starts were essential around a narrow, rough track where overtaking was tricky. Red Bull KTM celebrated another victory in MX2 as Jorge Prado still remains unbeaten in an exemplary season but SX-F technology owned both classes as Standing Construct KTM’s Glenn Coldenhoff won both MXGP motos for his first ‘overall’ of 2019.

Prado arrived at the venue where he toasted his first FIM World Championship as a seventeen year old last summer. The defending #1 rode to a clear qualification heat win on Saturday; his eleventh from the fourteen rounds he has contested in 2019 and ninth in a row. Prado had signalled his intent during Timed Practice with a lap-time over 2.5 seconds quicker than any other MX2 rider.

In the first moto on Sunday Prado passed early leader Darian Sanayei to pull away from the field and record his 25th chequered flag. The Spaniard then doubled-up for the twelfth time this term to take his tally to fourteen triumphs from fourteen and thirteen on the bounce.

Tom Vialle charged back to 5th place in qualification on Saturday and the young Frenchman was holding 3rd position in the opening race when he crashed, damaging his race bike to the point where he could not continue. Vialle was looking for better luck at the beginning of the second moto but a fall just before the pitlane straight on the first lap forced another withdrawal.

Rene Hofer made his third MX2 wild-card appearance under the Red Bull KTM awning at Imola. The Austrian had a brilliant first race; overtaking Spaniard Iker Larranaga with two laps to go to obtain 6th place and his highest classification yet in the category. The teenager fought from outside the top twenty in the second moto to reach 11th for 7th overall.

With a 130 point lead in the standings and only 150 led to win, Prado can formalise his back-to-back championship achievement in the first moto of the Grand Prix of Sweden next Sunday.

Jorge Prado: “The track was a bit easier and more flowing yesterday and it was harder to find the perfect rhythm today. It was tough. I was quickly into first in both motos and it was a case of good starts, good riding and moving forwards. Sweden [Uddevalla] is a track I really like and I won a moto there and took a podium in my first season in 2017. Hopefully we’ll do a nice race there next weekend and it will be doubly nice to get the title.”

Tom Vialle: “A strange weekend. I was really good in practice on Saturday and I liked the track. I was fastest in Free Practice and had a good sensation on the bike. I still don’t understand how I crashed in the first moto and in the second I was in sixth-seventh when I collided with another rider just before the pitlane. I wasn’t feeling too good and couldn’t continue. Disappointed not to score any points today but I’m not injured and will look forward to next weekend.”

Rene Hofer: “I’m very happy. My starts weren’t the best but I had a really good flow in the first moto and my physical condition was also really good so I could push until the end. In the second moto I unfortunately had a crash at the start and also slid-out with the rear at the end but still managed 11th. Anyway, I’m totally fine. It was hot work today but I’m satisfied and will now do my best to try and get another podium in the final EMX250 race in Sweden.”

MXGP will head directly north and to Uddevalla for the Grand Prix of Sweden next weekend.