Prado on MX2: It’s not boring, every race is a challenge 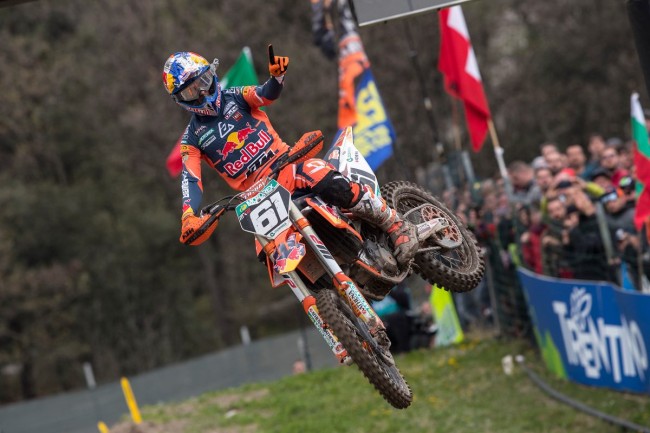 World Champion Jorge Prado defiantly countered opinions that he has made the 2019 FIM MX2 series boring. The Spaniard won his fourteenth Grand Prix of the year at Imola last weekend which means he is still unbeaten in fourteen appearances – he missed the British Grand Prix due to a shoulder injury – and has taken the last thirteen rounds in a row.

12 of his wins were claimed with a 1-1 scorecard, meaning Prado has totalled 26 chequered flags from 28 motos usually with a clear or dominant margin of victory.

“For sure it is not boring for me: every race is a challenge,” the eighteen year old said. “I have always tried to improve and progress this season. Maybe when I get a big gap of over 30 seconds people can say it’s boring. But they also don’t show me on the TV! Every time I watch the race back it seems like I am never on TV. I think a maximum of two laps each time.”

The double champion-elect revealed that a particular training method and the combination of experience, confidence and starts have helped make the difference. “My starts help a lot and I’m quite good on the first laps when the track is wet. In training, on our private track [Malagrotta in Rome], we prepare for that. I trained really well for this season. I improved a lot in 2018 and got a good basis. A bit more experience helped and I just put everything together to feel really good in pretty much every different type of dirt. I hope we can keep going like this for the future.”

Prado claims that he has still evolved his racecraft in 2019, even if his numbers and form would indicate otherwise. “In France when I was beaten by [Jago] Geerts in the first moto I lost the focus a little bit,” he says. “It was a lesson for sure. Every time I go out there I know it is not the end of my career and I need to improve. In that second moto at Imola I made a gap and at one point I saw the others got just a bit closer to me by a second or so but that made me think ‘Oh, I’m sure I can go faster…’ and that made me bring the lap-time down and increase the gap further, so things like that help with the focus.”

The Grand Prix of Sweden next weekend represents round sixteen of eighteen and Prado has a lead of 130 points over Thomas Kjer Olsen with 150 left to win. If the Dane takes the first moto at Uddevalla then Prado just needs 6 points (15th) to become KTM’s third back-to-back MX2 champion this decade. If he can continue his run in Scandinavia then Prado will have the added bonus of equalling Jeffrey Herlings’ run of fourteen consecutive GP wins in a single season, posted by the Dutchman in 2013. “If I need to take a risk then I won’t do it,” Prado smiled of the chance to match his 2020 MXGP teammate. “I won’t take it easy though! I’ll just do what I can. For sure I’m going for the win.”