Prado, Herlings and Vialle on China 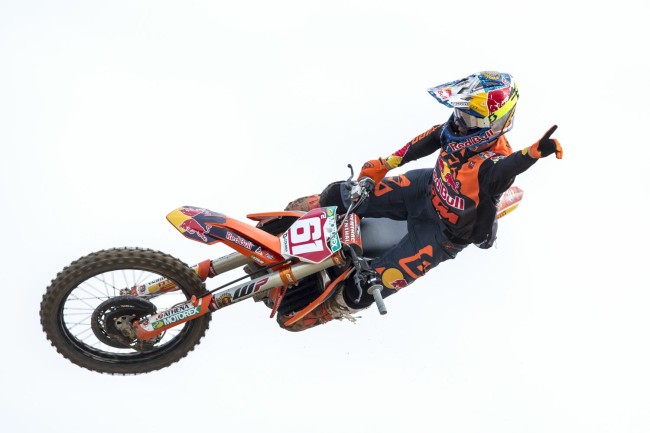 The eighteenth and final Grand Prix of 2019 took place in the district south of the city and across a soft and sandy circuit for what was a milestone fixture for the FIM series. The first ever visit to China brought a successful MXGP term to a close with a second consecutive MX2 world title with the KTM 250 SX-F, a breakthrough rookie season from Tom Vialle – who sealed 4th in the standings thanks to the runner-up position in Shanghai – and more silverware for the KTM 450 SX-F after Jeffrey Herlings’ double triumph in Turkey and now China and Tony Cairoli’s four victories in the first five rounds.

2018 MXGP World Champion Herlings harried Standing Construct KTM’s Glenn Coldenhoff in the first race as the two 450 SX-F riders finished within a second of each other at the flag: Coldenhoff celebrating his fourth moto win from the last four rounds. In the second race Coldenhoff again set the pace but once Herlings had moved into second place he set about chasing his countryman hard in the final five minutes. The Red Bull KTM man had to push to close a three second gap but relegated Coldenhoff with less than two laps remaining to secure his second overall win in a row thanks to his 2-1 scorecard.

Coldenhoff made sure of his fifth consecutive podium and outpointed Gautier Paulin to rise to 3rd place in the final standings.

After dominating 2018 both Cairoli and Herlings were the victim of injuries this season but still managed to collate 8 podium results between them despite only 12 appearances.

Jeffrey Herlings: “I wanted to finish the year strongly: I owed Red Bull, KTM and all my partners that after the injury. I gave everything I had and I’m very grateful to have won the last two GPs. I’ll race in the sand next week for the final preparation for Assen. Hopefully with Team Holland we can go for the win. Then, next year in MXGP, I want to fight hard to get the title back. I really enjoyed the track here – it was tough to pass in places – but we won the GP and that’s the most important thing.”

Jorge Prado took first place in the start gate on Sunday afternoon courtesy of his fourteenth Qualification Heat victory of the year on Saturday and from seventeen attempts through 2019. Tom Vialle followed his teammate to create the second 1-2 for the MX2 racers in their Saturday efforts.

In the first moto Vialle and Prado assumed their customary positions at the start of the field around the opening corners of the 1.6km layout. Prado took control by the end of the lap and rode home to his 30th win from 33 appearances. Vialle was a lonely 3rd but comfortably ahead of Jago Geerts.

The last outing of the season saw Prado despatch his MX2 career in the best possible way after earning his 23rd holeshot. Vialle slotted into second place and kept close to the #61 machine until the chequered flag.

After 17 Grands Prix and 34 motos Prado claimed 16 (13 of those with 1-1s) and 31 wins and completes the year with a 113 point margin over Thomas Kjer Olsen. Vialle secured seven podium results in his maiden term and just missed out on the top three by 6 points.

Jorge Prado: “Another great season and after 2018 we managed to do it again with some great races, consistency and another title. I cannot be happier. It was incredible. This weekend was my last GP with the MX2 bike and I wanted to do well and finish on the top. Tom was riding well today so I had to push. Two weeks on the 450 now before the Nations and some solid training to arrive there in good form. It will be a big challenge and we’ll see how it goes. I have great memories at Assen and I’m really motivated.”

Tom Vialle: “A really good weekend and two strong races, and it is nice to finish the championship like this. I didn’t get third place in the championship but I’m still happy with my riding. At the beginning of the season I thought the top ten or maybe even the top five would have been good race results for me but I quickly got up to fifth and then the first three. I won my first GP and was close to it again here. I enjoyed the track and the organisation was very good. My best moment this season was my first win in Sweden but I liked this last race because I got so close to Jorge. We’ll train hard this winter and hopefully go for the top place next year.”

David De Carli, Assistant Team Manager:“We had a great season with Jorge while Tony started so strongly and was unlucky. He won the first three rounds and had a good lead in the points but then had the crashes in Russia and Latvia. Jorge’s season was amazing though and we are really proud. He is always professional and always gives 100%. Thanks also to the whole crew, especially those behind-the-scenes and all the engineers, for all their work right from the start of the year.”

Dirk Gruebel, Co-Team Manager & Team Technical Co-ordinator:
“Today was unbelievable again. When it is time to race Jeffrey really delivers the goods and he gave everything he had to catch Glenn at the end. It says everything about him. He wants to win so badly. Glenn maybe deserved the win today but Jeffrey took it because he was the fittest when it counted. I’m almost speechless for Tom. He’s had a great year and only just missed out on 3rd in the championship. He never gave up the whole season and it is only right that many have him on their list as a title contender next season. He pushed hard to beat Jorge today and just ran out of time. 2019 started with a big bummer with Jeffrey’s broken foot and it was a blow for the whole team. Luckily Tom kept the spirit up and I cannot give more thanks to the entire crew for all their work. Everybody pushes for the same goal because we want to win races. We’ll be back for more.”

Jorge Prado and Jeffrey Herlings will represent Spain and the Netherlands at the annual Motocross of Nations at the TT Circuit Assen in two weeks time.