Prado and Herlings win in Turkey! 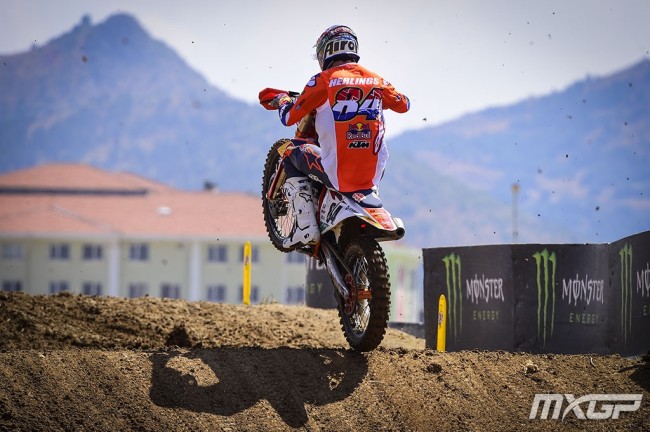 Jeffrey Herlings won his first GP of the year going 1-1 in heart stopping fashion with a sensational last lap pass on Glenn Coldenhoff in race two to ensure the 50 points.

Herlings ran down a very fast Pauls Jonass in the second half of race one and stayed calm throughout despite admitting after he finds leading the race and setting the pace harder than coming through the field, since his comeback.

Race two looked like it was Gajser v Herlings, but as they both chased Coldenhoff, Gajser like he has in almost every moto Herlings has raced this year, went down while third and handed Coldenhoff and Herlings the right to duel it out between themselves for the win.

Herlings had stalked Coldenhoff the entire race but he couldn’t find a way through until going for broke using an inside line that had nearly got the job done the lap before, this time Herlings made it stick to win his first GP of the year in style.

Gajser got back to third passing a very, very fast Ivo Monticelli who was seriously impressive in Turkey in both motos for fifth overall.

A jubilant Herlings said on his last lap pass: “I had that line and I risked it for the last lap, I knew I had to be on his rear wheel to do it. When I shattered my foot the doctor said I might never ride again, now I have won, Glenn rode amazing.”

With Prado in control out front it was a big five-way battle for the podium with Jago Geerts despite a shaky first couple of laps doing enough for second overall and Road Van De Moosdijk taking his first ever GP podium going 5-3 in a very impressive ride as he and Vlaanderen go at it for the MX2 spot on the Dutch team.

French MX2 rider for the MXDN, Maxime Renaux, was also very fast, in fact he was staying with Prado in race one until he went down and then down again trying to salvage a top three later in the race but the speed was impressive to take fourth overall.

Tom Vialle and Calvin Vlaanderen were just a point behind to show just how close the five riders were in both motos.