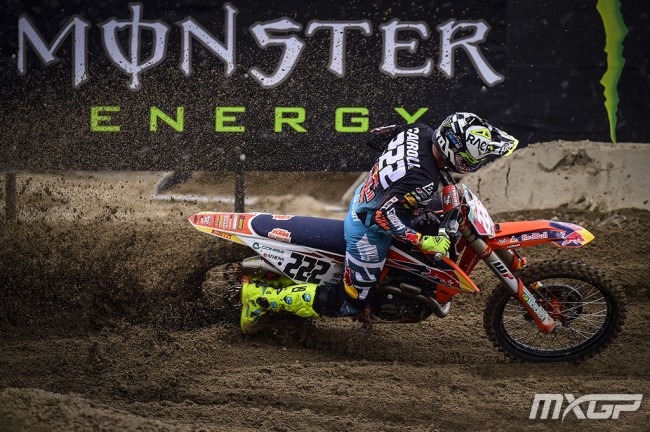 Jorge Prado dominated both motos on a very tricky, muddy and rutted Mantova circuit – but the Spaniard made it all look relatively easy with superb balance and a calculated style to pull away both times out.

Championship leader Thomas Kjer Olsen had a terrible start in race one but came through to sixth and then started fifth and moved through to second in race two behind Prado, who has cut Olsen’s lead to just seven points.

It was a great day for Davy Pootjes who took his first ever podium at world championship level and was left almost speechless after going through four years of injuries and tough times before finally getting on the box – persistence pays off!

In MXGP it was a similar story with Tony Cairoli taking the holeshot in both motos and putting on a riding clinic in the treacherous conditions.

But it was a disastrous day for Tim Gajser who didn’t even make it to turn one without crashing in race one after vying for the holeshot with Cairoli. Things got worse from there as Gajser lost his cool and crashed a further four times plus an off-track excursion – yet still salvaged a tenth place!

In race two a bad start and yet another crash meant sixth and allowing Cairoli to move 40 points clear at the top of the championship.

It was a great day for Pauls Jonass who put the five week break to good use to catch up on the rest of the field’s pre-season prep and he came out swinging to take second overall with two great rides (2-3) and show his true potential on the 450 machine.

Brian Bogers also had his best ride of his MXGP career with a superb second in race two in what should be a breakthrough ride for the dutchman.

But it was consistency again that saw Gautier Paulin take third overall with a sixth and fourth.