Ostlund and Walsh on Lyng 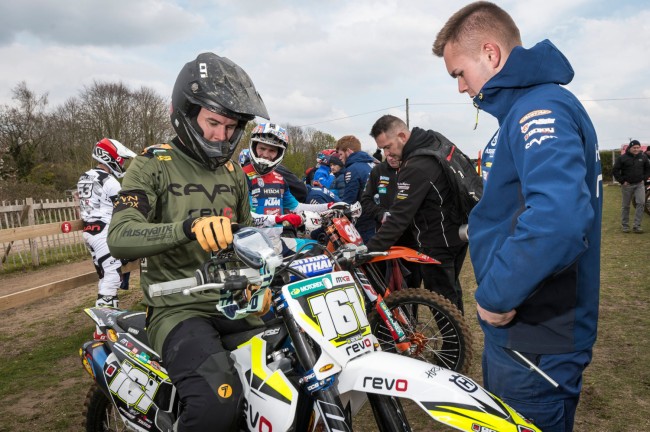 Round two of the Maxxis ACU British Motocross Championship at the challenging Lyng circuit in Norfolk was next on the schedule on Sunday for REVO Husqvarna UK riders Dylan Walsh and Alvin Östlund.

The sand circuit is notoriously tough but while it was Alvin’s first time at Cadders Hill, Dylan had made his Maxxis debut at the track in October and won the opening moto so despite still carrying a shoulder injury the young Kiwi was looking for a good result.

After qualifying in sixth in MX2 Dylan gated well in the opening race but crashed on lap one and came home seventh. In race two he led for the first half of the moto before getting caught in fencing and finished second.

Alvin qualified fourth and was third in race one after a solid performance. Following another good start at one point he was running second behind his team-mate in race two but slipped to fifth at the flag.

In the championship chase Alvin still sits third, six points ahead of Dylan who is currently tied for fourth.

“It could have been better but overall it wasn’t a bad day but Dylan was still nursing a bit of an injury and struggled a little early on.

“Qualifying was okay with Alvin fourth and Dylan sixth and Alvin had a real good first race to finish third – he was a bit disappointed but it was a solid performance, he just needs to show a little more aggression – but for some reason Dylan wasn’t quite on the pace, especially in the second part of the moto.

“Both started the second race well and ran second and third and then moved forward to first and second for a while. Dylan pulled out a good lead but unfortunately he made a big mistake, went into the fencing and hit his hands. He managed to keep the lead although it allowed Conrad Mewse to catch and pass him.

“Alvin also closed and they had a bit of a battle but Dylan kept hold of second. Alvin then made a mistake that cost him two places, he managed to recover to fourth and then got clipped in the very last corner and went back to fifth.

“All in all both riders put in solid performances to tie on points for fourth. It could have been better and a podium for both would have been nice but I was pleased by the way they came out fighting in race two, had excellent starts and who wouldn’t feel proud to see their riders running first and second?

“Alvin needs to be more forceful and hopefully Dylan’s finding his way back after getting injured at the end of March in Holland but it was a positive day for both riders and for the team.

“We’ve got three weeks now until our next race which will give Dylan time to get fully fit again and then I’m looking forward to seeing two strong performances at Canada Heights for round three of the Maxxis.”

“I’m a little disappointed about the second race. I didn’t feel good in the first race and felt much better in the second but the finish wasn’t as good.

“It was a big fight in a group of maybe four guys and it was eat or get eaten and I got eaten.”

“My shoulder’s feeling better but it’s still been a tough weekend for me. I crashed on the first lap of moto one and was leading moto two but got caught up in a fence and banged up my hands pretty well so just had to bring it home in second.

“Canada Heights is next and it sounds like it’s a good track. My father was brought up just down the road from there and I’m looking forward to it.”