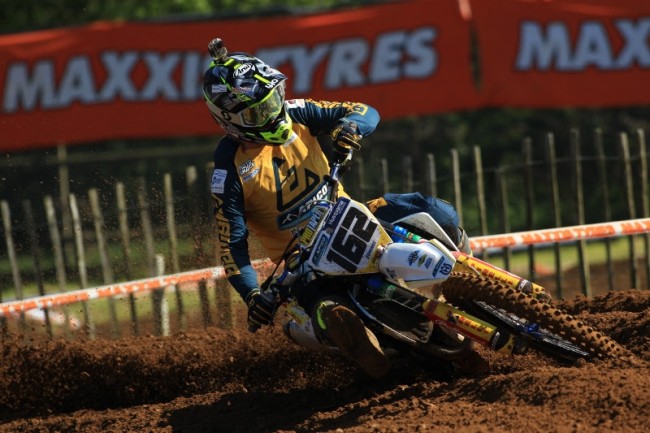 Young CreyMert KTM rider, Hakon Osterhagen faced a very difficult and technical track in Teutschenthal, Germany but the track suited him well. Not only did he manage to directly qualify for the races, but he also came close to scoring his first championship points as he showed very good speed. Tom Guyon won on the day with Mattia Guardagnini still holding the championship lead.

After not qualifying for the last few rounds of the EMX125 series, Osterhagen was able to put that behind him and set an impressive lap time in Teutschenthal – sixth in his group to comfortably qualify!

Unfortunately, when the gate dropped for moto one, another rider crashed right in front of the young Norwegian leaving him nowhere else to go so it meant he had a lot of work to do right from the back of the pack. He showed his determination and started picking the riders off one by one and soon got himself in twentieth and points looked like a real possibility. On the last lap he took a crash which meant he dropped back to thirty-second again – such a shame after he showed good speed.

Thankfully, Osterhagen took a much better start in moto two as he was in the top ten at the start. It’s the first time he’s been able to see the speed in the top ten all season. After losing a few positions he went back to tenth but then worked his way up to seventh again behind Everts. After de Wolf passed Osterhagen it looked like he’d finish a strong eighth position but on the very last lap crashed and couldn’t finish the race – heart breaking! The positive though is that he’d have learnt a lot from that race and knows what the speed is like in the top ten now.

Osterhagen: The time was good in qualifying as I was 6th in my group. The first race I had a bad start, but I was battling for the top twenty. In the last lap I had a crash and dropped down to thirty-second. The second race was one of the best races I’ve done in EMX. I was about 15th at the start and rode up to 7th. Then someone passed me and I drop down to 8th. Then it is typical for me to crash hard on the last lap which meant I didn’t finish the race.

After a big crash in Rhenen, Kevin Horgmo is working hard on his recovery and his hoping to get back on the bike next week. It’s thought he will make his return to racing at the final round of the Dutch Masters or Lommel for the next round of the EMX250 series.

With the World Championship heading to Indonesia, the EMX riders will have time to prepare before the next round of their championships. Creymert Racing’s next race will be at the final round of the Dutch Masters during the Zwarte Cross Festival.