Opinions on the new goggle lane 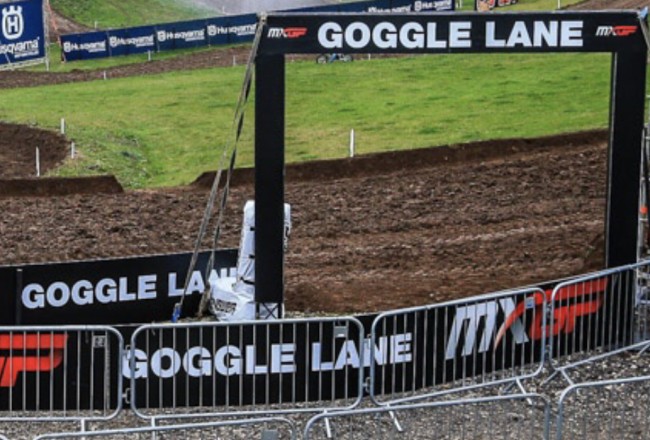 Observant visitors to Matterley Basin and the British Grand Prix may have spotted the new ‘Goggle Lane’ at the end of the pit straight. This area/initiative is new for 2019 and in reaction to the amendment to the FIM rulebook stating that riders must circulate during races with eyewear; if goggles are ditched then racers have until the following lap to either pit or enter the Goggle Lane to grab a new pair. MXGP athletes were informed about the addition to their potential race strategy at the opening round in Argentina where they were also told – allegedly – that there would be no ‘hard enforcement’ of the rules for 2019 as the paddock acclimatises to the presence and use of the Goggle Lane.

“They said they were not going to penalise anyone if you don’t stop,” revealed Max Anstie at Matterley Basin. “I think for this year it doesn’t matter. They’ve done it [established the Goggle Lane] to make it faster and to make the riders want to do it.”

Anstie rightfully cited the example of Calvin Vlaanderen’s misfortune at the 2018 Motocross of Nations as justification. The HRC man was forced to ditch his eye protection in the RedBud mud and subsequent medical/cleansing treatment meant he could not enter the final moto in the USA and the Netherlands missed out on what would have been a sure-fire victory. “It’s so they don’t have the situation like with Calvin at the Nations,” affirmed the Standing Construct KTM rider. “Maybe if they had the Goggle Lane  [there] then he wouldn’t have had that issue. It is a good thing that they recognised it and they are trying to see what happens. It might be only one or two races where we’ll use it. We’ll see. 90% of the time you don’t need to change goggles.”

“I haven’t tried it yet but it seems like a good idea to me,” voiced Rockstar Energy Husqvarna’s Thomas Kjer Olsen. “It is so dangerous to ride without goggles and to go right through the pitlane takes a while. I haven’t seen it being used yet but it could work.”

HRC’s Tim Gajser pointed out the potential ‘tactical’ problem with the Goggle Lane and one-lap rule for the future: will a rider take more risk with dirty or malfunctioning goggles rather than lose time making a forced change? It is a scenario that could well arise, particularly towards the end of races and for final positions. “For safety it is better but from the other side nobody will want to lose time by throwing the goggles away and might persist with muddy ones or try to look with one eye to try and not stop,” he said. “It has a positive and some bad about it.”