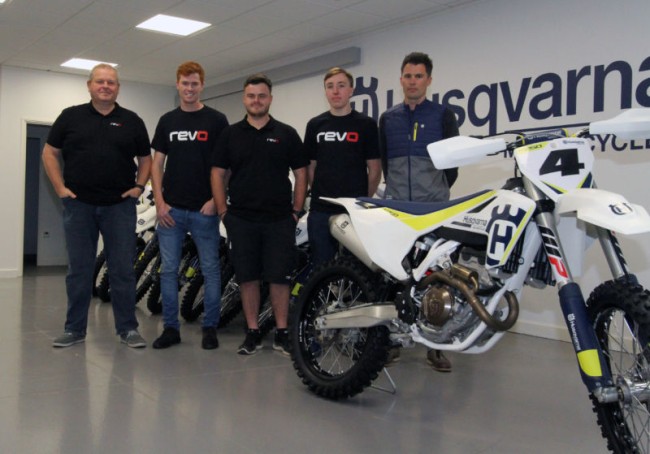 Husqvarna UK’s official MX2 team, REVO Husqvarna will contest the Maxxis British Motocross Championship along with the Michelin MX Nationals and selected rounds of the FIM EMX 250cc series on the race-proven FC 250.

The team, based out of REVO’s Daventry headquarters, will be run by Mark Yates. Sam Yates will be Mel’s mechanic and Gary Finch will take care of Jamie’s bikes. Mel, a former European 250cc champion, raced a REVO-prepared machine in 2014 when he finished second in the Maxxis MX2 championship.

After sitting out almost the entire 2015 season with a hand injury the 24-year-old joined Roger Magee’s Hitachi REVO Husqvarna team midway through 2016, narrowly missing overall Maxxis podiums at Blaxhall and Preston Docks. Jamie, 17, was the stand-out star of this year’s Maxxis MXY2 championship, winning five motos and three overalls as he ran away with the UK’s biggest youth title.

Mark Yates (Team Principal) “The 2017 season is going to be very exciting for us and we appreciate the faith and support that Husqvarna Motorcycles UK are putting behind REVO. “This has been on the cards for a while with a lot of product suppliers and sponsors showing interest in supporting us. This, coupled with plenty of rider interest, made us decide to channel all our financial and physical resources into re-establishing our own team. “We have assembled a solid team that will allow us to make a strong challenge next season. Mel’s grit and determination after his 2015 accident is a testament to him and this drive makes him a serious contender for the Maxxis MX2 title. “Jamie will be moving up into the Pro class which we know is a big jump but no-one, including Jamie, is under any illusion and along with Justin Morris we will work with Jamie with the goal of breaking into the top 10 as the season progresses.”

David Edwards (Husqvarna UK Brand Manager) “Husqvarna Motorcycles are very pleased to be working and racing with REVO in 2017 as our official MX2 team. REVO have been a big part of the 2016 racing set-up and now wanting to do their own team themselves shows their character and desire to succeed which we are pleased to be a part of and support. “Mark and Sam will put out a very good-looking and well-run team and bike and with Mel Pocock and Jamie Carpenter riding for them I think that 2017 is looking good.”

Mel Pocock “I’m very confident that Mark’s going to do a good job with the new REVO team. He knows what’s right and he knows what looks good – it takes a lot to run a team correctly and he can do that. There’s a structure to everything we do and we stick to it. It’s a very professional set-up. “Of course, I see myself as a front-runner in the British championship. It’s a long season but we’ll be gunning for a title at the end of it. Let’s get the ball rolling and bring on the new season.”

Jamie Carpenter “It’s a great opportunity for me and I’m very excited. I won the Maxxis MXY2 title this year and it’s fantastic to be making my debut as a Pro rider on the REVO Husqvarna team. I’m not entirely sure what to expect at the moment so it’s just going to be a case of working hard this winter and making sure my preparation is the best it can be.”