Nicholls reflects back to his Youth days 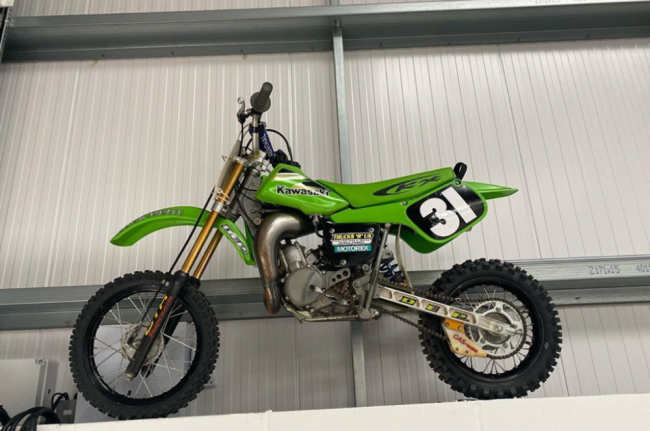 Jake Nicholls takes a look back to 1999 when he was a young rider trying to make a break through at British Championship level – Nicholls ended up going on to have a good career in the MXGP paddock so all the hard work paid off.

“Getting the holeshot at Hawkstone park at the first round of the British championship, I had only done one British championship round before this so I was crapping myself but I’ve never really been afraid of the unknown and always was up for it once I knew I was riding half decent, I looked good too, Dad had me in a full Jeff Emig replica set up, I even wore tech 8’s at the age of 9 (laughs). This bike was special, only the Alessi Bros and I had the no linkage swingarm set up from R&D in the states, and fork extensions as I was a big kid done by Chris Taylor at CTR who founded Ktech and I think still owns it, plus an Mtech motor”.

The highlights for Nicholls that year were winning every race at Midenhall and then getting shouted at by Paul Cooper for not drinking water! Nicholls also remembers getting beat by Jason Garrett at Desertmartin in the past! Garrett might not have had a successful career as Nicholls but it showed the talent he had.

“Highlights were winning every race at the round held at Mildenhall. I’ll never forget finishing the last race, my mum gave me a ribenna juice – Paul Cooper congratulated me then said what is that crap you’re drinking, you should be drinking water. I thought he was mental to be honest, I remember getting smoked by Jason Garrett at Desert Martin, cartwheeling a bmx at Brampton on the dirt jumps on the Friday night – winded for the first time, thought i was dead. Getting beat most weekends by a scruffy lad from Gloucester called Charlie Wood who eventually beat me to the championship by a few points I think, we were convinced he had a big bore (laughs). Standard schoolboy mentality, winning Exeter supercross – basically a roll and roast race for 60’s and definitely leaving school on Friday lunch times about 8 times a year, mum and I packing the camper up and waiting for dad to get back from work early, BLT sandwiches on route in the old school fun mover. Also my dad falling out of the over cab bed in the camper one night after sinking too much piss at the pub at Lyng, think I got concussed that night from an awning pole falling off & drilling me too. Grateful my parents took me about the country throughout the summer like they did, from that year forward I believed I could be professional”, Nicholls concluded.