Nicholls on his MVRD Suzuki days 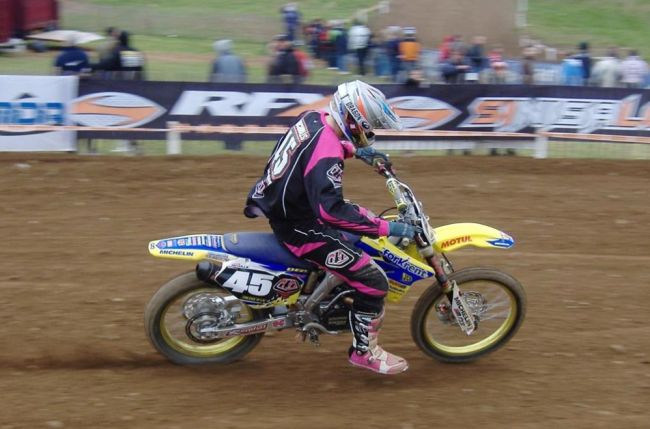 Jake Nicholls has reflected back during his time with the MVRD Suzuki when he was trying to break his way in the Motocross world as a youngster.

“When I look at this bike I think of: The 1st GP of the year at Valkenswaard, top 12 out of each qualifying race went through, I was running a comfortable 9th when Dennis Verbruggen crashed on the blind side of a single and I hit him and crashed. I went to last chance qualifying TIMED session (something I was very bad at then) and missed out by a second. I then missed out at the 2nd GP in Spain, it was muddy so they abolished the heat races and just had a timed session, I was miles off and gutted”, Nicholls stated on social media.

During the third GP of the year, the Brit qualified and was so excited for race day, he forgot it was his girlfriends birthday! His team manager at the time, Mark Chamberlain also taught him a valuable lesson during that GP.

“3rd GP of the year not long after my 17th birthday I qualified easily through the heat and I was made up, so made up I totally forgot it was Blu’s birthday and I got a snotty text that night. Next day it was 34’c, I rode pretty crap in the first race and got 23rd, I was so nervous. In the second race I pulled out after 18 mins because the fuel was boiling and I felt it was dangerous to ride. While having a shower back at the track the team manager Mark roared in, opened the shower door up and went absolutely mental at me for pulling out, he went so mad I’ll never forget it and I bit back slightly then he said to me “if you’d of f***ing rode round one handed you’d of just scored 2 GP points as only 18 riders finished. I apologised later and from that day forward I’ve never pulled out of a race unless there is something seriously seriously wrong, lesson learnt and I’m forever grateful for Mark going mental at me like that. We had a good year and I gained loads of experience”.

“One of the funniest moments was the Sunday night after the Japanese GP, my first time drinking after a race, all us Brits went out and ended up in some Karaoke bar, it was at this point I found my hidden talent of exposing myself after a few beers, apparently on a stage too… My memory comes back at 6am when Jason Dougan my team mate, and I got back to our room, in the hour we had to get ready we managed to hurl the tv out the window, flood the bathroom and put a hole in the wall. The season ended a month early at my track when, while testing the Swift Suzuki bike for the following season with Matti Seistola, I crashed in the woods breaking my humerus badly”, Nicholls concluded.