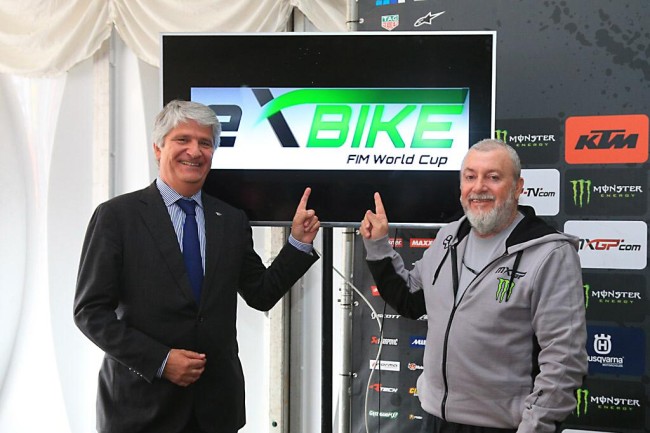 Youthstream is proud to announce a brand-new event and vision for the future of racing! Together with the FIM and E-Bike manufacturers Youthstream will host the first ever FIM E-XBike World Cup in its debut during the 2019 MXGP of Italy in Imola this August.

This weekend’s MXGP of the Netherlands has now hosted a press conference in front of MXGP’s collection of international and national media to announce the new e-bicycles race taking place on the 1,550 meters long Imola MXGP circuit following Saturday’s MXGP Qualifying the 17thof August.

Youthstream President Mr. Giuseppe Luongo stated, “We are very excited to start this new project with the FIM, we thank FIM and in particular their President, Mr. Jorge Viegas, for the trust and for this opportunity to develop this new sport, it will be both challenging and very interesting. Our goal is to develop the FIM E-X Bike World Cup for all customers and riders who want to enjoy racing on an extreme circuit in front of a massive crowd and with a great media coverage.”

The one race format will include a mass start with combined categories of both male and female riders racing for 30 minutes plus 1 lap but scored separately. The racing will be opened to anyone with an electric bicycle. The event is being developed with the full support of Youthstream as CEO Mr. David Luongo explains, “Youthstream will put all its TV and Media resources to promote as much as possible this new competition. The first FIM E-XBike World Cup will be broadcasted live on our OTT Platforms, MXGP-TV.com, and our Facebook MXGP Page that has more than 2.5 Million followers.”

Jorge Viegas, the new elected President of the FIM took part in the conference as well during his first MXGP visit and enthusiastically said, “I am very happy that the FIM is starting to provide competitions for electric bikes. The first ever FIM E-XBike World Cup will allow a new generation of riders to take part in these exciting races. Thanks to the support of our promoters Youthstream and Infront, the Italian Federation and the Imola circuit, the FIM will be able to offer the public who come to the MXGP in Italy the opportunity to discover a new type of competition. For the FIM it is a reoccurring story because the first motorcycles were based on a bike frame, with the addition of a motor. In recent years the electric technology has evolved considerably, and we are convinced that the FIM E-X Bike World Cup will offer the manufacturers a great platform for further development. An E-bike round table meeting will also be organized in Belgium at Metet MX circuit the 9thof June in conjunction with another E-Bike / Pedelec race organized under the authority of the FMB.”

Continuing the tradition of progressing racing and two wheeled sports Youthstream is excited to work with both the FIM and the manufactures to promote this new era. For more information on the 2019 FIM E-XBike World Cup follow MXGP.com and all of our digital platforms