MXGP results and report: Prado and Gajser win in Portugal! 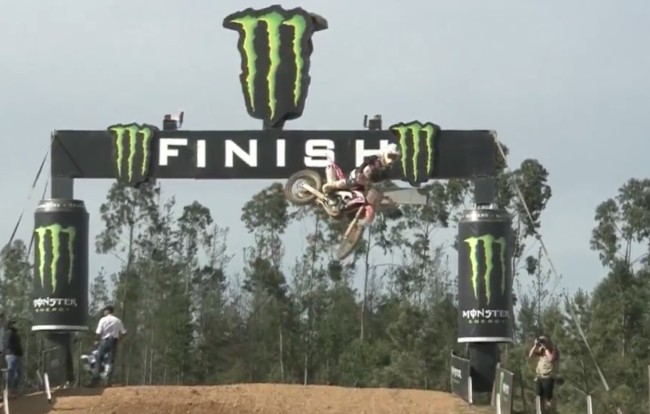 Tim Gajser won both motos in Portugal after battling Tony Cairoli both times out to continue an intense championship battle.

Cairoli holeshot race one but Gajser stayed on his heels and when the Italian stalled briefly, Gajser pounced taking the lead and held on strong despite intense pressure from Cairoli until the end. In fact, Gajser did his fastest lap of the race on the last lap to hold off the Italian!

In race two it was Desalle who passed Tonus in turn two to take the lead with Cairoli on his tail. But Gajser was in panic mode after getting banged about in the opening two turns. He came out sixth and fought his way into third despite almost having another trip over the bars on lap one trying to find spaces to make moves!

Once Gajser got into third he set about catching Cairoli and Desalle and did just that making it a three way battle for the lead. Cairoli upped the intensity at the halfway mark and made the move on Desalle but Gajser got the Kawasaki man at the same time and then the title combatants set about sorting out the overall winner.

Now in clear air, Cairoli set the fastest lap but Gajser was still right there when the Italian unexpectedly hit the deck and gifted Gajser the lead!

Cairoli got up in fourth and fought hard to get by Desalle and then an in-form Tonus who rode superbly to take third in both motos as Cairoli managed to force his way back into second to only lose six points in the championship.

But this was a big win for Gajser who couldn’t afford to lose any more points and has the gap down to 34 with more hard pack tracks coming up.

Jorge Prado took both moto wins and the red plate in MX2 but he was made to work for it in both motos!

Prado holeshot the opening moto as Thomas Kjer Olsen started just outside the top five but the tall Dane worked hard to get into second eventually passing Henri Jacobi who was also riding good all weekend. Olsen closed the gap to Prado at the end but the cool Spaniard did enough to take the win.

In race two Prado holeshot but Aussie Mitch Evan passed the defending champ and led for a good 15 minutes before Prado found his way back past. Evans stayed close until he faded a tad in the last five minutes with Henri Jacobi coming on strong to take second in the dying laps. But it was still enough for Evans to take third overall and his second podium in an impressive season.

Thomas Kjer Olsen messed the first turn up and came from outside the top 200 to fourth in a brilliant ride to stay second overall but he will be disappointed he lost the red plate despite possibly being the fastest rider on track today.