MXGP of Lombardia: The Preview! 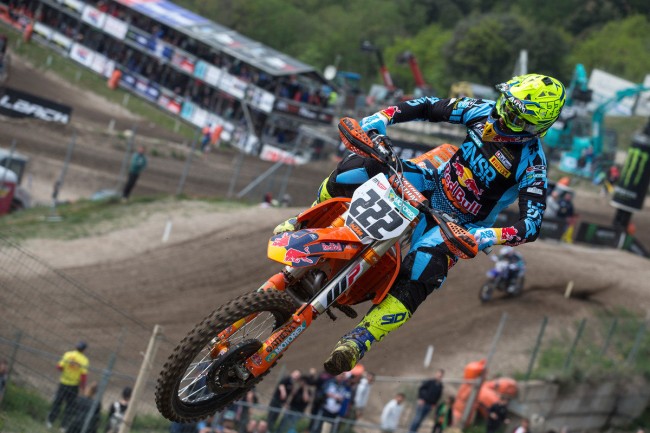 Two weeks have passed and MXGP is back to racing at another new circuit! This time around the 11th round of the FIM Motocross World Championship will be held at the Ottobiano International circuit completely renewed for the Fiat Professional Fullback MXGP of Lombardia.

The Circuit of Ottobiano boast a 130,000 square meter parking lot paddock side and over 1.600 trucks have gathered 16.000 cubic meters of sand to create the arena for the event.

While MXGP’s last visit to Italy was earlier in the year for the MXGP of Trentino which provided great racing action. This weekend’s racing will undoubtably be filled with the same hosting not only MXGP and MX2  but the European championship classes of EMX250 and EMX125 Presented by FMF Racing along with EMX300 Presented by FMF Racing.

Red Bull KTM Factory Racing’s Antonio Cairoli is not only the current points leader but he is also one of the biggest names in Italian motorsports. His last visit to his home country was one of his most impressive showings of heart and determination via a spectacular race comeback. With sponsor commitments, endless fans, and of course fantastic racing, Cairoli has a busy home GP ahead of him as he tries to claim both Italian overalls this season.

Monster Energy Kawasaki Racing Team’s Clement Desalle has found the winning formula the past two GPs in a row. From the hard pack French soil to the mud of Russia, Desalle his stepped up to the top of the podium. After the past GPs Desalle has moved up to 2nd in the championship points. While Desalle’s visit earlier in the year to Italy resulted in 6th overall, the Belgian now has confidence and is at the least a podium threat.

Frenchman and Rockstar Energy Husqvarna Factory Racing’s Gautier Paulin has had solid results lately but it is clear he is capable of even higher. Paulin already has a GP overall under his name this year but after slipping out of 2nd and down to 3rd in the championship, he will be shooting for another overall this weekend. Paulin finished 5th overall during the last Italian GP.

Fourth in the points chase is Red Bull KTM Factory Racing’s Jeffrey Herlings. Herlings comes off an impressive MXGP of Russia podium. While some may contend that he should have done better, the podium came in the mud a condition that has plagued him in the past. Looking forward to this weekend, the “Bullet” will be back to his bread and butter of soil, sand. Herlings is often referred to as the world’s best sand rider and will look to show it on the new Ottobiano circuit.

Monster Energy Yamaha Factory Racing’s Romain Febvre season started to turn around in France and continued to improve in Russia. The 2015 Champion nearly won Russia’s race 2 on the way to 6th overall. Riding with new found confidence and determination Febvre will likely be fighting for a podium this weekend.

Team HRC MXGP is back in full force while the last GP it was Evgeny Bobryshev, this time it is the reigning champ Tim Gajser making the return. Still 5th in the championship after missing out on points the few previous rounds, Gajser is back and excited to compete on the new Ottobiano circuit, in what may be the beginning of a comeback.

Returning from injury is also Wilvo Yamaha MXGP’s Shaun Simpson. Simpson known as a “sand master” last raced at the MXGP of Latvia.

While Desalle has won the last 2 overalls in MXGP Red Bull KTM Factory Racing’s Pauls Jonass has done so in MX2. The difference for Jonass is that they are 2 of many this season and that are helping him to grow his points lead. Showing consistent results regardless of the conditions Jonass truly is the man to beat.

Meanwhile Suzuki World MX2’s Jeremy Seewer is the man trying to beat Jonass and after his performance in Russia’s race 2 it is clear he is motivated. Seewer lapped every rider but second place including Jonass in third. With gaining points as his focus this GP the easiest way for the Swiss rider to do so is by winning the overall. Now 45 points off the lead be sure to keep on eye on the number 91 this weekend.

Rockstar Energy Husqvarna Factory Racing’s Thomas Kjer Olsen had his first taste of success in MX2 during the last Italian GP when he won the qualifying race. Sitting 3rd in the championship and with one GP overall under his belt, he will be fighting for his 2nd during this visit to Italy.

LRT KTM’s Julien Lieber finished 3rd at the MXGP of Trentino and will be looking to do the same if not better at Lombardia. Struggling lately with mistakes and falls Lieber could use the confidence boost of a podium finish.

Kemea Yamaha Official MX Team’s Benoit Paturel is working his way forward this season and most recently scored 4th overall in Russia. Paturel is now 14 points behind Lieber but still looking for his first overall. If Paturel can nail a pair of good starts the chances of him accomplishing the Lombardia overall are decent.

Another rider to watch this weekend is HSF Logistics Brian Bogers who comes of a season best podium finish in Russia.

HRC MX2 team will have Michele Cervellin riding his home GP but it will be along side the new recruit of Anthony Rodriguez. On the other hand in what would be a home GP for TM Factory Racing’s Samuele Bernardini the Italian will instead sit out with a knee injury.